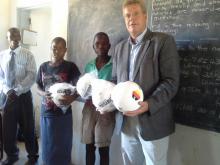 Ambassador of Germany to Malawi, Dr. Peter Woeste, saw firsthand the impact of The Hunger Project’s Epicenter Strategy on his trip to Champiti Epicenter in Malawi on December 4, 2013.

The Epicenter Strategy employed by The Hunger Project in Africa was developed in Africa by Africans. An epicenter is a dynamic center of community mobilization and action, as well as an actual facility built by community members.

Through the Epicenter Strategy, 5,000 to 15,000 people are brought together as a cluster of rural villages. This unity gives villages much more clout with local government than a single village would otherwise have. They are subsequently better able to generate resources to manage their own services.

The epicenter building serves as a focal point where the motivation, energies and leadership of the people converge with the resources of local government and non-governmental organizations. To date, The Hunger Project has mobilized over 2,200 villages to create more than 115 epicenter communities, reaching nearly two million people across Africa. Through practice, refinement, mistakes and learning, the Epicenter Strategy has become highly effective, affordable and replicable.

At the epicenter itself, the Ambassador met with:

After discussing epicenter leadership with community activists, the Ambassador donated a number of footballs and a pump to Champiti Primary School.

The Ambassador spoke highly of THP’s model of poverty reduction throughout his visit, calling the strategy ‘heartening’ and said that he was impressed by The Hunger Project’s approach to community ownership. The Hunger Project-Malawi is now exploring next steps, ideas and follow-up with the German Embassy, an Embassy that focuses on democracy, governance and human rights.