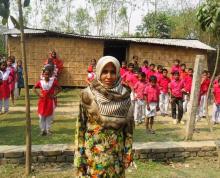 Sometimes, thriving as a woman in Bangladesh can be challenging.  A strong woman has to be a survivor. Manowara Afroz Saleha is a model of such a powerful woman. Ever since her childhood, Saleha has dreamed of being a teacher and someone who worked for the development and betterment of society.

Saleha was born in 1969 in the union of Channilakhiya and the village of Kumarikanda. Her father stayed with his family in Netrokona district to tend to his agricultural work. Her mother was a homemaker. Saleha was the eldest of two siblings. Sadly, her younger brother died at the age of six.

As the only daughter, she was adored by her parents. Her parents wanted her to be well educated. Unfortunately, the role of women in her community did not make that possible. In 1976, Saleha’s father became terribly sick and passed away. She was shocked by this sudden tragedy and mourned for her father. She said she often felt there is no one else who understood and supported her in this world. After her father’s death, a serious economic crisis made life seem utterly hopeless to her and her mother. As a result, they were compelled to seek shelter and support from a distant relative.

Despite this tragedy, Saleha continued to study and dedicate herself to hard work. She started her primary education at Nurul Ulum Khareji Madrasa in Netrokona. In 1981, she received her Dakhil degree successfully from Gituary Dakhil Balika Madrasa in Mymensing district. After her Dakhil degree, she began planning for the next stage of education. She talked to her cousin Mr. Mokammel Haq who arranged a job for her. Thus, she moved to live with her cousin in Chittagong district. Regrettably, Saleha was deceived by her cousin who simply wanted to marry her, not employ her. She was forced to marry him and, rather than continue her studies, became a house wife. Determined to continue learning, however, Saleha received a one year sewing training from Mohila Bishoyok Odhidoptor in 1990.

With her new sewing skills, Saleha became more self-reliant and got a job at BRAC N.F.P School as a teacher, even though she was not highly educated. She felt that her job and her marital life were going quit well until she got into a dispute with her mother-in-law. Saleha’s mother-in-law demanded a dowry which Saleha’s mother would not agree to pay. This conflict led Saleha’s husband to be brutal and physically abusive and, one night, abandon her on rail road tracks. Neighbors picked her up from the rail line and made sure she got treatment from the hospital. With time, Saleha recovered, filed a case against her husband’s family and won retribution. Saleha’s husband agreed never to abuse her again so she returned to the relationship.

Henceforth, Saleha’s was determined to gain a broader understanding of the condition of women in society. She made a plan to mobilize women to fight violence against women. In 2005, she established Shapla Shomobay Shomity to promote self-help work and various other social programs. Today there are nearly 35 members in this organization. They currently have around 30,000 taka (US $375) to conduct activities and continue to save more each month.

Through her this social work, Saleha was introduced to the Union Parishad seat member Ms. Sahinur. Ms. Shahinur introduced Saleha to The Hunger Project-Bangladesh’s animator trainings. Saleha completed the training successfully in 2006.

With her new training, Saleha expanded her work and established a kindergarten school for underprivileged children called Roj Kindergarten School. This school is entirely directed by voluntary service. Saleha is the head teacher at the school where she works with three other teachers to educate nearly 100 children.

Saleha went on to received additional training in the Women Leadership Foundation Course from THP-Bangladesh in 2010. As a result of this training, she realized that empowered women are capable of incredible growth and development. She feels that every woman needs to receive this training. Saleha is now also working to stop child marriage and working with women in her region to provide sewing training. She also expects to be elected as a member of her union parishad and has plans to establish an organization (Baondho Kutir Shilpo) to rehabilitate and mobilize the older women in the community.

Saleha is not only working for women’s empowerment and the underprivileged children but also for sanitation. She has arranged meetings, rallies, and stage dramas to educate people about the importance of using sanitary latrines.

Though Saleha is not formally educated, she has been working for the underprivileged people in society with incredible skill. With an extreme effort she has becomes successful in fulfilling her childhood dream.