William Easterly’s Tyranny of Experts: It’s “Time at Last” for Development to be about Human Rights and Equality 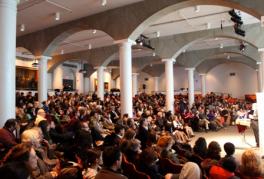 At a recent book launch for Tyranny of Experts: Economists, Dictators, and the Forgotten Rights of the Poor at Cooper Union’s Great Hall in New York in early March, development economist at New York University (NYU)’s Development Research Institute William Easterly questioned and sought to debunk what he referred to as development “myths.”

As relatively new fields of study and practice, international development and development economics are searching to find the “best way” to eradicate poverty, hunger and suffering. However, often conspicuously absent from this agenda is the objective to preserve human rights and dignity as fundamental to development. Referencing a speech given by Woodrow Wilson in 1919, when Wilson referred to those living in poverty as “helpless peoples,” Easterly highlighted this disempowering perspective that has pervaded contemporary development practice, creating what Easterly refers to as the ”Tyranny of Experts.”

Easterly explained that the current “Tyranny of Experts” system emphasizes technical solutions, which often obscure the importance of the rights of people living in poverty. The “forgotten rights of the poor,” Easterly said, “are moral ends in themselves.” Development actors should prioritize the economic and political rights of communities to make their own decisions and obtain consent on projects that will impact the community members’ lives. Easterly therefore questioned the assumed benevolence of governments and offered an alternative: when governments are accountable to an empowered population whose individual rights are protected, they are then provided with the incentive to be benevolent.

The Hunger Project ’s vision is a world where every woman, man and child leads a healthy, fulfilling life of self-reliance and dignity. Our sustainable, grassroots, women-centered programs are led by the communities in which we work. Community partners are politically empowered through electoral processes and capacity building, such as through the SWEEP program in India. Communities coordinate directly with local and national governments in Bangladesh and Mexico, calling for accountability and government responsiveness. Throughout all of our programs, The Hunger Project seeks to preserve the human rights and dignity of the communities with which we partner, as we work toward a more equal society based on individual rights.

As Easterly says in Tyranny of Experts, it is “time at last for the silence on the divide between the rich and poor to end…all men and women are indeed created equal.”