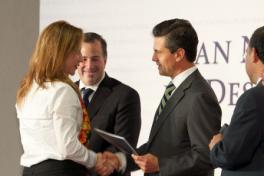 Over seven million Mexicans are living in extreme poverty. One in four is living with some degree of food insecurity, despite the decree that all Mexicans are Constitutionally entitled to nutritious, sufficient and high-quality food. Recognizing this, President Enrique Peña Nieto established the National Crusade Against Hunger (the Crusade) on January 21, 2013 as one of his first presidential initiatives. Describing the Crusade as an “integrated strategy of inclusion and social well-being,” President Peña Nieto has united diverse actors from the public and private sectors toward one goal, demonstrating the potential of a comprehensive, holistic strategy at a local level as a truly sustainable means to eradicate hunger and reduce poverty.

The Hunger Project’s (THP’s) mission to end hunger and poverty by pioneering sustainable, grassroots strategies fundamentally aligns with the Mexican government’s commitment to mobilizing communities at the local level to achieve zero hunger. As a prominent member of the civil society in Mexico, THP-Mexico’s Country Director Lorena Vazquez Ordaz was invited to share her immense experience in alleviating hunger on the ground by providing recommendations of key objectives to inform the development of the Crusade strategy. THP-Mexico’s current programming fulfills four of the five Crusade objectives (see PDF of objectives). Ms. Vazquez Ordaz now serves on the Council of the Crusade, advocating for inclusion and the empowerment of the communities, and was selected to chair its Monitoring and Evaluation Sub-committee.

The Crusade focuses on hunger as a prominently visible manifestation of poverty, showing the importance of orienting a social program toward building capacity at an individual level. By prioritizing the most marginalized communities – 400 municipalities and villages that are living in the most extreme levels of poverty – the Crusade focuses on deeply inaccessible regions of Mexico that have previously been neglected.

Through participatory community development programs on a highly localized level, the Crusade aims to achieve the following five objectives:

Committees at the lowest level of local democracy allow communities to identify their own needs, and work to meet them. Throughout this process, the Crusade provides the necessary tools to move forward and the communities take care of the rest. Promoting this proactive mentality breaks with the structure of resignation among many impoverished communities of Mexico. Planned community projects include increasing access to food, health, education, improved housing, increased incomes and basic services such as water, electricity and drainage.

Mexico has risen to the challenge to fight hunger at home, acting as a leader in the regional aim to eradicate poverty. With a strong foundation of social policies already in place in Mexico (including the cash transfer program, Oportunidades), Mexico has a track record of dedication to alleviating suffering domestically. Other countries have joined this mission, launching initiatives at home in Guatemala, Nicaragua, and Panama. President Otto Perez Molina of Guatemala is scheduled to visit priority municipalities participating in the Crusade alongside President Peña Nieto, to bring lessons learned from Chiapas, Mexico to Guatemala’s Zero Hunger (Cero Hambre) initiative.

Nearly half of the municipalities and villages participating in the Crusade are located within our program areas: one-third of the communities are in Oaxaca alone.

Hunger is a significant impediment to the sustainability of any future initiative aimed at development, and the Crusade is raising the right to food to a national priority level. The Crusade is not the first national development plan dedicated to the alleviation of hunger. But with the support of THP and other civil society organizations in Mexico, we are committed to making it the last that is necessary. We are eager to continue working with the Government of Mexico to achieve zero hunger, and applaud their ambitious endeavor as they lead the region in social development.

Learn more about The Hunger Project-Mexico.