THP-Australia Partners with hike4hunger in Honor of World Food Day 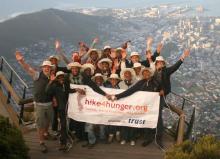 Hike4hunger commemorates United Nations World Food Day on October 16 by encouraging others to join or initiate personal pilgrimages, symbolic walks of solidarity ending at a place of significance. Each year, all hike4hunger proceeds are donated to an organization working with marginalized communities in Sub-Saharan Africa. In 2010, hike4hunger is partnering with The Hunger Project-Australia.

Hike4hunger’s annual global hikes aim to spread awareness of world hunger and to draw attention to World Food Day. At the moment there are at least 11 hikes underway in Australia, Canada, Germany, the United Kingdom, the United States, South Africa and Zimbabwe. This year’s campaign hopes to raise over $200,000 for The Hunger Project.

Founder of hike4hunger, Simon Lewis had this to say about the partnership:

“The Hunger Project shares many of the same objectives and values that are near and dear to those we want to achieve with hike4hunger….I love that The Hunger Project goes a step further than other organizations-it helps change people’s thinking, and brings them together as a community to work together.”

Lewis began the first hike4hunger campaign during the recent global financial crisis. During the height of the crisis, the United Nations released statistics anticipating that 50 percent of Zimbabweans, over five million people, could face starvation during 2009. As a fourth-generation Zimbabwean, Lewis had seen firsthand the effects of hunger in Zimbabwe while growing up. With the threat of nationwide hunger looming once again, Lewis knew it was the time to take action. His passion paired with his personal belief in the power of pilgrimages quickly resulted in a new campaign to raise awareness: hike4hunger.

Hike4hunger hikes are community-led initiatives with ever expanding participation. Hikes this year will last anywhere from one to ten days, culminating in World Food Day on October 16.