Take a Stand: Highlights From Our 2018 Fall Gala

At our Fall Gala weekend October 19-21, more than 300 Hunger Project activists, investors and staff joined together to stand FOR something. 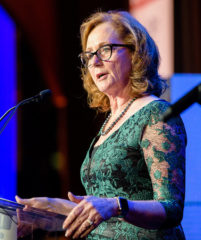 In her welcoming address, the evening of October 20 at Pier Sixty in New York City, Suzanne Mayo Frindt, President and CEO of The Hunger Project, set the stage for the bold future of the organization and of the world at large — a hunger-free world, bolstered by the indomitable force of millions of people standing side-by-side with shared vision.

“Achieving the end of hunger will take unwavering commitment. And it will mean a transformation of the way the world works. It’s time for a Quantum Leap. We have a vision of The Hunger Project being a catalyst— lighting a fuse to end hunger…”

Bringing the power of a shared vision to life, we were honored to hear from five Hunger Project Country Directors, joining us from Uganda, Ghana, Mexico, Bangladesh and Malawi. Each Country Director brought the strength of their passion directly to Gala attendees, speaking from intimate stages set right amongst banquet tables — visually representing the power of taking a stand within a crowd. Together, they wove a tapestry of transformation, joy, courage, self-reliance and dignity that blankets the work of The Hunger Project.

Dr. Daisy Owomugasho, the Country Director of The Hunger Project-Uganda, shared the story of Irene Namigadde, a 36-year-old widow raising five children in Kiboga, Uganda. With the resources and training of her regional epicenter, Irene went from subsistence farming to being a thriving business owner. Of her experience with Irene, Daisy shared, “what motivates me most is that I can be counted on to help transform someone’s life. I want you to know that: Irene has tripled her income – she currently earns 6 times Uganda’s national average. And, importantly, Irene wants you to know this: she’s been able to educate all of her children — in other words The Hunger Project has truly changed her life.”

Samuel Afrane, the Country Director of The Hunger Project-Ghana, shared his own story with the audience. As a child in a family of 15, he was born into a family that valued education in rural Ghana and now feels immense joy at being present to see his own experiences mirrored in the lives of Hunger Project partners. “Every day I feel inspired I feel inspired to serve and to create opportunities for the development of our village partners because I see the great talents that are in them unearthed and their tremendous potential awakened.” 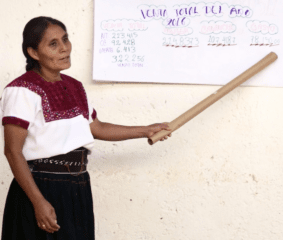 Lorena Vázquez Ordaz, the Country Director of The Hunger Project-Mexico, shed light on the tremendous courage required to stand and make changes in a community with the story of Mercedes, 46-year-old mother of five and indigenous woman living in the community of Bayalemó in the state of Chiapas, Mexico. Mercedes was elected as President of an economic co-op board in her community, but accepted only reluctantly – painfully aware of the challenges of being a woman in leadership in a traditional community. But the following year, in seeing her impact on women younger than her, Mercedes “stepped into this position as an expression of her stand for women and girls. She took that stand so that they could see themselves taking leadership roles. When new guild elections were held for the first time, younger women were nominated and for the very first time – they said yes.” 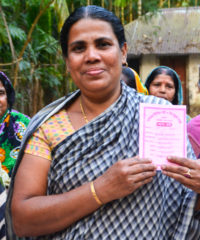 Dr. Badiul Majumdar, the Country Director of The Hunger Project-Bangladesh, (featured photo above) told the audience about the life of Lila Rani Das, a 49-year-old widow with two young boys who was effectively rendered homeless following her husband’s death. In 2001, she took The Hunger Project’s animator’s training and became an activist. “The training gave her the determination to stand on her own feet. And she is now a self-reliant person.” Lila is a living example of progress made towards achieving the world’s Sustainable Development Goals by 2030.

And Rowlands Kaotcha, the Country Director of The Hunger Project-Malawi, too, shared his own story through the eyes of his mother and her journey to give birth when living in a rural community with access to health care. “She described how while in the throws of labor she walked to the nearest hospital a distance of over 10 miles. She described those 10 miles – as vividly as if it were that day in 1974 all over again.” He went on, “On that day, I took a stand…I stand for dignity. I stand for a life of value. A life that is not only fulfilling but also a life that gives value to someone else’s life.”

Please see photos of all our speakers in the Flickr album below and read our Country Directors’ full remarks here.

The event concluded with a call to invest by long-time Hunger Project investor and activist Jan Solomon asking each attendee to identify their own stand and an interactive performance by FriendZWorldMusic.

As global citizens, standing shoulder to shoulder in partnership for the end of hunger, we invited attendees to see what’s possible with participation in The Hunger Project. The world around us is ever evolving and The Hunger Project asks for your bold commitment to ensuring every woman, man and child leads a healthy, fulfilling life of self-reliance and dignity.

More From the Weekend

On Friday, like-minded young professionals came together for a social networking hour to dream up all the ways a community can stand together to make a difference and how unique gifts and talents are needed in the world today. Attendees participated in an interactive role-play shedding light on the realities of being a women in Hunger Project Program Countries and heard from our Director of Programmes in India, Ruchi Yadav.

On Saturday morning, the Gala was preceded by a special interactive learning session to take a deep dive into The Hunger Project’s work, hosted by Executive Vice President, Dr. John Coonrod. Together, we will renew our understanding and unyielding commitment to The Hunger Project’s first principle — human dignity — as the world celebrates the 70th Anniversary of the Universal Declaration of Human Rights.

And on Sunday, a special group of women (and men who support them) who call themselves to action to achieve the end of hunger in an inclusive way came together for a Women in Philanthropy panel (and quiz!) throughout which we discussed ways to maximize the collective power of women to make a profound impact on the world.

Invest Now in the empowerment of women and men leading their own change. 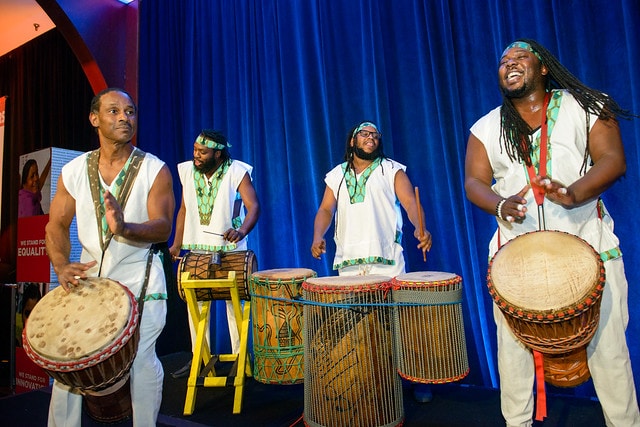