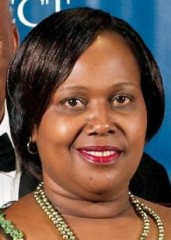 Dr. Daisy Owomugasho is the Regional Director for East Africa. She has previously served as Country Director for The Hunger Project (THP)-Uganda since February 2011.

Prior to joining THP-Uganda, Dr. Owomugasho was a lecturer at Makerere University in Kampala, one of the most prestigious universities in Uganda. She has also held the position of Executive Director at two non-governmental organizations: the African Women’s Economic Policy Network, a pan-African, faith-based organization that seeks to strengthen the capacity of women to influence economic policies; and the Uganda Debt Network, which works to promote and advocate for poverty assistance policies.

Dr. Owomugasho has also worked as a consultant for the Food and Agriculture Organization of the United Nations (FAO), African Development Bank, InWent of Germany, Idasa of South Africa and International Budget Project. She has participated in several international conferences including the World Trade Organization’s (WTO’s) Fifth Ministerial Conference in Cancun, Mexico in 2003, and the UN Conferences on the Status of Women (UNCSW) in 2004, 2008 and 2010.