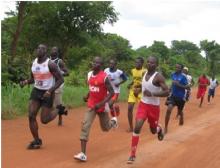 THP-Benin had a busy period, kicking off 2012 with two well-attended epicenter inaugurations as well as two investor trips and a visit from Global Office staff. Expansion of programs, epicenters and staff also continued with the hiring of a Partnership Building and Resource Mobilization Officer (PBRMO) and the identification of a possible new epicenter in the north of Benin. THP-Benin continued implementing its innovative program initiatives, from its cross-cutting environmental and youth mobilization activities to its nutrition campaign to expand use of moringa trees.