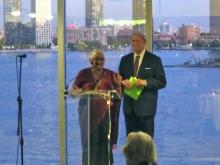 It was a very humbling experience to stand at the United Nations (UN) Headquarters and receive the lifetime achievement award on the occasion of 10th Anniversary of the UN Second World Assembly on Aging.

I was touched when introduced by Mr. Clarence Pearson (Member of the Executive Committee of the UN NGO Committee on Aging) as “a woman for all seasons and an accomplished professional, human right advocate par excellence.”

I was delighted that my friends Ranjit and Rati and the whole of The Hunger Project family were there with me to share my happiness.

During my speech, I emphasized that there was only one ingredient required to help the elderly and that was to give them respect and dignity. I summed up my speech with the importance of love, something in which I have always believed in.

Congratulations to Dr. Giri from all of us in The Hunger Project family!