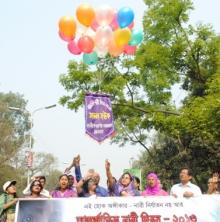 Each year, The Hunger Project joins billions of people around the world in celebrating International Women’s Day (IWD) to honor and raise a voice for women around the world. Particularly relevant given recent violent acts against women, this year’s IWD theme was “A promise is a promise: Time for action to end violence against women.” On March 8, 2013, thousands of women and men partnered with The Hunger Project around the world to advocate for equality, prosperity and empowerment for all women. Here we highlight some of the most powerful demostrations as reported by our global partners.

THP-Bangladesh and the Girl Child Forum jointly observed International Women Day 2013 at more than 400 places throughout Bangladesh. The central event was organized in Dhaka and was followed by a huge rally (pictured above), discussion meeting and award giving ceremony. The rally was opened by Meher Afroj Chumki, Member of Parliament (M.P.) and President of the Parliamentary Standing Committee for Ministry of Women and Child Affairs. Nearly 1,000 women, men and children representative of 35 organizations joined the rally which ran from the Teacher-Student Center of Dhaka University to the Shisu Academy (National Child Academy).

After the rally, participants joined a discussion meeting chaired by Dr. Badiul Alam Majumdar, Country Director and President of the Girl Child Forum. Meher Afroj Chumki M.P. was the Chief Guest. At the meeting, the Girl Child Forum presented awards to two distinguished women for their significant expertise and achievements in respective fields. The honorable awardees were Zobera Rahman Linu and Sara Afreen.

Zobera Rahman Linu is a respected public figure in Bangladesh, a Guinness World Record holder as national table tennis champion 16 times consecutively, and a former Ambassador for UNICEF. Sara Afreen is an architect and filmmaker. Amongst a handful of young upcoming Women Producers from Bangladesh, Sara is the first Bangladeshi to graduate from European Audio Visual Entrepreneurs (EAVE) and was awarded full scholarships from European Commission’s Media Program Fund (Media Mundus) and France’s National Center of Cinematography and the moving image (CNC). Through her passion for filmmaking she has been an avid activist by organizing programs like Hope, an open film screening program for under-privileged school kids; Filmy-Bahas, an open platform form film dialogue; Traveling Film South Asia, a documentary film festival featuring South Asian films; and Shadhinota, a film festival in the spirit of independence.

On March 8th over 70 women from San Luis Potosi attended a dialogue on gender equality for the first time in their life. The women of the communities of Pukte and la Pimienta made several important distinctions about the importance of women in the decision making of the community, and about the value of their voice and participation.

At the end of the meeting the women were able to express that “we feel we’ve got rid of a weight in our hearts because we found that men and women are equal before the law and are worth the same.”

In Chiapas, the women of the cooperative J’pas Joliviletik who have worked with The Hunger Project since 2009, celebrated International Women’s Day with a dialogue on violence against women, inviting their husbands and children, giving them a share of the process of being empowered women leaders.

For our partners in Chiapas, it was extremely important to include their spouses and children as they strongly believe that only together can they achieve their vision of having a community free from hunger and poverty.

Tarcila Rivera Zea, president of CHIRAPAQ Centre for Indigenous Cultures of Peru, was awarded by the Ladies Committee of the Congress for her constant efforts and dedication to service for her community. The award was given to enterprising women leaders and fighters as part of the celebration of International Women’s Day.

“Women have an array of functions for the good of the family, society and the interests of the nation,” said Narda Eguren, president of the Committee, during a ceremony held in the auditorium of the Legislature Sánchez Carrión.

CHIRAPAQ builds the capacity of indigenous women leaders, many of whom have held public office in their communities, as well as of the regional and government organizationsactively involved in the national and international indigenous movement.

Read the full story of Tarcila’s award on CHIRAPAQ’s website.

At Bissiga Epicenter, women’s groups, student groups and epicenter leadership gathered to honor International Women’s Day with a day of bicycle races, dancing and speeches.
Check out more AMAZING photos from the day!

THP-Ghana partnered with the National Commission for Education (NCCE) to create awareness on IWD and its relevance as this special day for women. The sensitization covered a historical background to the celebration of IWD and the adoption of March 8 as a day set aside by the UN to recognize women’s achievement, and looked back on past struggles and accomplishment as well as prospects for the future. The opportunity was used to condemn all forms of violence against women and girls, adding that there had not been any development initiative or achievement that is without the contribution of women.

THP organized a community meeting at Nsuta-Aweregya Epicenter with THP staff, Heads of Departments, Women’s Empowerment Program Animators, Chiefs, Queen mothers and teachers to address young girls from Aweregya basic schools. Speakers shared about various challenges women face and discussed the opportunities available to girls to grow into women leaders in the future and to help develop their families, communities, the country and the world as a whole.

A total of 139 people, mostly girl students, participated in the day’s meeting.

In The Netherlands, we had a great Ladies First week – running up to International Women’s Day. Ladies First was our week-long women-focused campaign mainly organized by our volunteers and sponsors, which included a nationwide ‘women’s snack’ sale, a women’s kickboxing fundraiser event (Power Women), men offering flowers to honor strong women at a hockey match, an online and offline Candy Girl chocolate sale, a film event and discussion about strong women in India, and THP-Netherlands Country Director Evelijne Bruning speaking on women’s day on the national television’s most popular day-time show for women. The campaign also featured a sponsor-designed campaign material and a sponsor-built dedicated website that featured stories of THP partners Céline from Benin and Rajwanti from India.

In Sweden, volunteers participated in a joint event with Ladyfest and Amnesty International in Gothenburg at the Museum of world Culture. And the Malmö International Friends of the Hunger Project organized a lunch for volunteers with raffles and prizes!