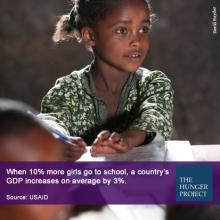 “Women and girls – in many roles, including their role as mothers – drive improvements in the human condition. When we invest in them, we invest in a powerful source of global development.”

– Melinda Gates, Co-chair of the Bill & Melinda Gates Foundation, State of the World’s Mothers 2013, Save The Children

Each year, The Hunger Project joins billions of people in celebrating International Women’s Day (IWD) to honor women around the world and to rise up to advocate, as a global community, for equality, prosperity and the empowerment of all women.

The 2014 theme for International Women’s Day is: Equality for women is progress for all.

Throughout the developing world, women are the primary providers of food security for their families and communities. Women grow the majority of the food, up to 90 percent in some regions. They are intensively involved in food processing. They collect cooking fuel and water. They prepare and serve meals, ensuring that their families’ daily food requirements are met.

Despite their critical importance to food production and food security, the majority of women endure conditions of economic and social marginalization. They continue to account for over 60 percent of the world’s hungry. They are less likely to attend school than men. They have less access to credit, agricultural extension services and land ownership. They have little, if any, voice in decision-making. The disparity between what women do, and the resources they have, is staggering.

What the Facts Show

Studies show that when women are supported and empowered, all of society benefits. Their families are healthier, more children go to school, agricultural productivity improves and incomes increase. In short, communities become more resilient.

On March 8, around the world, thousands of Hunger Project partners, staff, volunteers, investors and activists will join in International Women’s Day celebrations to shine a spotlight on the importance of demanding equality for women. Join us!

“Women are the largest untapped reservoir of talent in the world.” –Hillary Clinton

The Hunger Project firmly believes that empowering women to be key change agents is an essential element to achieving the end of hunger and poverty. Wherever we work, our programs aim to support women and build their capacity. Women’s Leadership Workshops in India, a Women’s Empowerment Program throughout Africa and specialized animator trainings worldwide empower women to seek positions of leadership and train all of our partners, women and men, to take responsibility for improving lives in their communities. Learn more about what we do.

This year, International Women’s Day will be commemorated at UN headquarters in New York on March 7, on the eve of the 58th Session of the Commission on the Status of Women (CSW58), which begins on March 10.

The Hunger Project, along with BRAC and Center for Health and Gender Equity, is hosting a parallel session on Monday, March 10 from 10:30-12 PM, as a part of CSW58. NGO leaders working in Africa will share comprehensive, gender-based programs that improve the health, education, nutrition, income and basic human rights of women and girls – and the policy lessons provided by these innovative approaches in a panel titled “Gender is Fundamental to All the MDGs – Lessons from the Field. RSVP to the panel here.

Not in NYC? Find an Event Near You

You can invest in a life of opportunity for women when you invest in THP’s work to empower women worldwide.