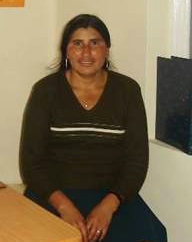 Nelida Smith was born in the community of Cueto Tarabuquillo Tomina municipality (in Chuquisaca) on July 18, 1981. She is unmarried. Since 2003, Nelida has held different leadership responsibilities: Secretary General of the community of Pampas Down, of the Sub Tarabuquillo (2003), and of the Province Tomina (2004); as County Executive (2005-2006); and as Secretary General of the Federation of Farmers of Chuquisaca (2008-2010).

Nelida Smith is also a candidate for the Senate in the forthcoming December 2009 general election.

“In the leadership training courses, I learned to share my knowledge with others and learned a lot from them too. The topics covered were very interesting; they included leadership issues, history of native peoples, municipal management, preparation of project profiles and more. The trainings helped me to develop greater knowledge that I could use to strengthen my organization.

“My family is proud of me and, because I have assumed important positions in peasant organizations. My parents and brothers encouraged and motivated me to continue in my challenges.

“In political matters, I could not contribute anything before, but now I feel able to contribute from my experience. I can take more informed positions in public spaces and have a responsibility and commitment to serve others.

“Recently, I decided to run as a candidate for Senator in Chuquisaca in the general election in December 2009. I hope to achieve my goal!”