The Power to Dream in Mozambique 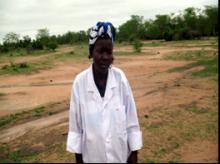 Thirty-three year-old Mrs. Ana Sebastiao Zitha is a mother of one, and dreams of someday becoming the president of her rural bank at The Hunger Project (THP)-Mozambique’s Chokwe Epicenter.

At the moment though, Ana is busy enough with THP-Mozambique, as a member of their Microfinance Program (MFP), and as an animator.

Ms. Zitha is involved in various income-generating activities at the epicenter such as bread baking and mud-brick making. In her role as an animator, she works to promote financial stability, while mobilizing people to be involved in sports, cultural events and other community activites.

Ana became involved with THP-Mozambique in 2006, when she participated in several Vision, Commitment and Action Workshops. Inspired by what she learned there, she joined THP-Mozambique’s MFP, and shortly afterward received her first loan. With these inititial funds she started a small business buying and selling fish and charcoal products.

Ms. Zitha said that the happiness she feels as an MFP participant comes from being able to run her own business, build her own house and send her child to school.

Ana has been diligently attending all trainings offered at the epicenter, including those on microfinance management and food processin. She has recently become an animator, because she wants to share the benefits she gained through THP-Mozambique with others.