Mexican Woman Discovers Power Within Herself, Her Community 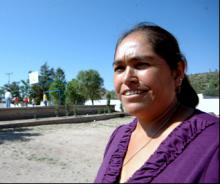 Raquel García Vidaña is 38 years old, and is the Delegate of the Community of Jose Maria Morelos in the Municipio of Juan Aldama, Zacatecas, Mexico. She is married to a man named Carmelo and is a mother of nine children.

In her own words:

“Most of the young people in my community migrate to the US because they think that in Morelos, there are no jobs and no opportunities. I even considered migrating myself, hoping to earn more money.

My life was dull and unsatisying, and I always used to think to myself, who will come to help me out? I used to tell myself that since we were poor, we would never move up in life. I used to think that nobody was interested in helping us improve our lives.

“Ever since I attended a Vision, Commitment and Action Workshop (VCAW) through The Hunger Project-Mexico (THP-Mexico), and then became a catalyst, my life has changed. My whole community has changed. It removed the wool from my eyes, so to speak – helped me to stop thinking in a paternalistic way. I learned to look after myself and not to depend on the government to help me move up in life. I realized that here, in my community, we can run our own businesses and work hard to give a better quality of life to our children. If we want to have a better life…we have to work, and we are working!

“We came together and decided our first goal would be to build a clinic; we got organized and determined what we would need to make this happen. Some gave cement bags; some others gave some trees to plant, some gave labor – whatever they could.

“Before [my family] did not have a bathroom…we used to go out to a latrine or to the open field. We committed, saved some money, and now we have a bathroom with a toilet and a shower!

“But the story does not end there; I told my husband that we could still improve even more… I did not want a wood heater, I wanted a gas boiler! We worked together and we achieved it. With all these achievements, we are all inspired and working to build a bathroom in every house; having a bathroom will mean a healthier life for every family. 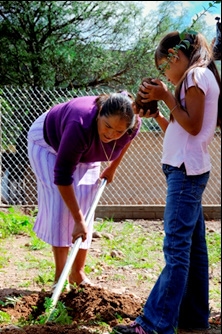 “I used to think that women were not strong or capable. But now I could see the needs that existed in my community, and decided to run for office as a Delegate. I thought that the men would not support me; in the end though, it was men who elected me! I am the first woman Delegate and people are astonished; they congratulate me on the street. I am proud to be a woman. We, the women, can!

“There are still some men in my community who say that the woman’s place is either in the kitchen or doing the washing. But little by little, their attitudes are changing. My husband now helps me with the housework; we decided that since we are a couple, we both have to share the work.

“Many things are changing in Morelos; in the past, we lacked the skills to communicate and share our ideas. We felt like improving our lives wasn’t feasible; we were shy and afraid. Since we started working together with THP-Mexico, we have lost that fear. It is never too late! It is possible to improve and we are doing it!”