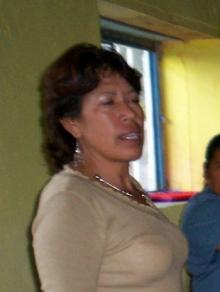 Raquel Soto Hernández, from Colonia Ricardo Flores Magón, Durango, is in her 40s. All her life she had been behaving according to what was expected from her. She was a good housewife. She neither studied nor worked nor had income of her own. Her son and daughter were raised to believe in and act according to gender roles. Some time ago, Raquel began to realize that she wasn’t happy. She felt stagnated.

Then, she met The Hunger Project (THP), and she found the tools she needed to set herself free and be able to make a change in her life, family and community.

Nowadays, Raquel has autonomy and mobility. She has been exercising her leadership with other women and youth. They began baking and selling bread in order to get money for a community savings fund. She is also mobilizing the community to improve their little clinic, to collect money to buy a medicine cabinet, and to get some women trained in first aid. In addition, Raquel organized a volleyball team, and now the team travels to different communities to play.

She has learned that she has the power to make things happen and that it is her responsibility to transform her life and her community.

At the beginning, her husband and son were pretty angry with Raquel. Now, they are even starting to participate with her in different activities. Similarly, her daughter is now questioning her own behavior and is starting her own liberation process.

It is an honor to partner with such a wonderful woman leader!