A Better Future for Our Children 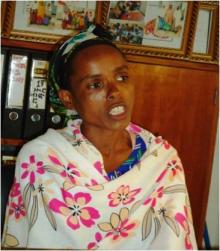 Wurib is located 140 km from Addis Ababa, the capital city of Ethiopia. Wurib Epicenter was mobilized and entered its first phase of development in August 2009. It has since reached its second and third phases of sustainability in 2010 and 2011, respectively.

Community members like Rukia Tiga have played an important role in prioritizing education and school safety in Wurib. Rukia is 27 years old. Her seven children attend Mikaelo, the only primary school available to them. Like most mothers, she wants her children to flourish in a safe learning environment. However, their school’s lack of resources posed a threat to many of the children’s health.

“Mikaelo was not a suitable place for children. The classroom walls were made of mud. The floors were dusty. Children also suffered from not having a toilet.”

According to Rukia, in the absence of toilets, open areas and playgrounds doubled as a bathroom—making contagious diseases all too commonplace. These problems were compounded by the fact that the school had no access to clean water. All students were expected to carry water with them to school to help clean it.

Alongside the district government and other NGO’s, including The Hunger Project-Ethiopia, Wurib Epicenter has invested a significant amount of resources aimed at improving the community’s living conditions and access to education. Mikaelo now has a toilet for girls and boys and clean water.

Rukia is optimistic about the work being done to address the basic needs of water, sanitation and hygiene in Wurib. She claims the support of organizations like The Hunger Project make progress achievable.