President and CEO of The Hunger Project Speaks at U.N. on the Post-2015 Development Agenda

President and CEO of The Hunger Project, Åsa Skogström Feldt, was selected as one of 21 spokespeople from the 6 “Major Groups” (NGOs, Women, Youth, Businesses, Farmers and Indigenous Peoples) on Thursday, February 19 to address the Interactive Session of the General Assembly on the Elements of the Political Declaration as part of the intergovernmental negotiations on the Post-2015 Development Agenda.

Watch the video (remarks begin at 42:47) or read her remarks below. 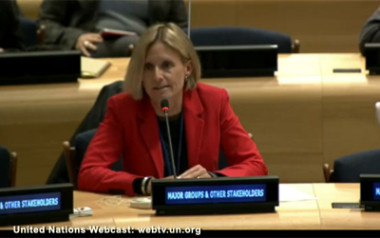 Mr. President, I am honored to be here on behalf of millions of rural women, men and youth active in The Hunger Project across Africa, Asia and Latin America.

On their behalf, I would like to make one point on what we must do to reach the world we want. We must empower people.

It is time to rethink our approaches. Women and men living in poverty are not the problem; they are the solution. When given the chance, women, men and youth will provide the leadership, intelligence and hard work to overcome their poverty and preserve the environment.

In mobilizing people, we must s​tart with women. ​ Women are the majority of those living in poverty. Women do far more than their fair share of the work. They invest in the development of their families and communities. Women must be empowered as key change agents.

This declaration must call for a w​orld of opportunity t​hat empowers people to succeed as authors of their own development.

Mobilizing people’s self-reliant efforts must be the starting point of revitalized partnerships.

National ownership is critical – and it must reflect the ownership, aspirations and participation of people and their local communities.

Strong institutions must build from the bottom up – with people’s own associations and participatory local government.

Unleashing people’s power to lead their own change is indeed the road to dignity for all.