Past, Present and Future: New IFPRI Report Frames Past Achievements and New Challenges for a Post-2015 Agenda 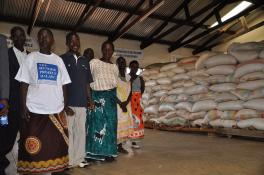 Significant strides have been made in the last thirty years.

According to recent estimates by FAO, the number of people living in conditions of chronic hunger has declined in the last three decades by close to 15%. In order to fully eliminate hunger and undernutrition by 2025, however, the international community will have to increase its sustainability efforts and long-term strategic investments in community and environment.

As an organization that is committed to advancing human dignity and eradicating hunger, The Hunger Project understands the challenges faced by many underserved communities and the importance of forging strong partnerships between districts and governments in order to address food security and sustainable agricultural practices.

Highlights of the 2013 Sustainability Report

India’s Food Security Act: Since the adoption of the National Food Security Act, an estimated two-thirds of India’s 1.2 billion people are now entitled to fixed rations of subsidized grains.

Food Safety in China: In response to growing food safety concerns, China’s General Food and Drug Administration has been tasked with developing and monitoring safety standards for food and drug production, distribution and consumption.

Sustainable agriculture is a viable channel to achieve food security in an environmentally responsible manner. According to the IFPRI report, “Growth in the agriculture sector is shown to reduce poverty three times faster than growth in any other sector—manufacturing, industry, or services.”