All Politics is Local: Building Grassroots Democracy from the Bottom Up 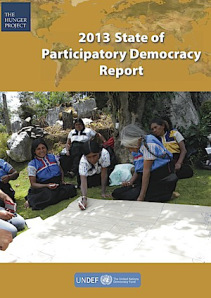 The old saying that “All politics is local” is especially true when it comes to overcoming poverty and hunger. Issues of nutrition, primary education, primary health care, water and sanitation, preserving the environment and ensuring public safety are all local issues. Actually getting basic public services to work requires good local government.

The global quest to cut hunger and poverty in half by 2015 through achieving the UN Millennium Development Goals has largely ignored local government. Yet now, as the world community considers how to finish the job of ending poverty in the Post-2015 era, it is beginning to “think local.”

However, decentralization is not easy. Bureaucrats do not easily relinquish power. The skill levels in impoverished communities can be very low. And, in countries where democracy has been established in a top-down manner, a feudal mindset may still prevail; both the government and the people may not be aware that government should be accountable to the people – not the other way around.

The most important feature of good local governance is participation. People not only vote every few years; they have direct voice in decision-making and governance through public forums, citizen committees and voluntary action campaigns.

A revolution in Participatory Local Democracy is underway in many parts of the world.

We at The Hunger Project have completed a global study of this phenomenon for the UN Democracy Fund, surveying activists in more than 90 countries, and profiling 35 countries. We highlight some very exciting innovations:

We also found a glaring gap between first-rate legal provisions for participatory local democracy in a number of countries, and weak implementation on the ground. Certainly, the lack of international attention on this issue doesn’t help close the gap.

The Hunger Project’s experience in more than 20,000 villages around the world has taught us that poor people are not the problem; they are the solution. When people have the opportunity to take charge of their own lives and destiny, and exert control over a fair share of public resources, they can rapidly and dramatically improve their lives.

To learn more, check out the Participatory Local Democracy Project website and get updates from the project on our Weekly Newsletter, Facebook, and Twitter. It’s time to start to “thinking local.”

This piece appeared originally on FeelGood’s website, our university fundraising partner. They are a national movement of social entrepreneurs for the end of hunger, with chapters across the country. Every year FeelGood students initiate thousands of conversations and raise tens of thousands of dollars, all for the most critical global issue of our time.