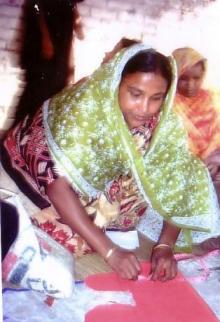 Hosne Ara Asma, known as Asma, was born in 1976 in the village of Asan Nagar, Alamdanga Upazila of Chuyadanga district. Financial conditions of her parents were not good, but they were very interested in educating their daughter. Unfortunately, while Asma was a student of class nine, she married Kamal Hossain of their locality, who was her boyfriend. Her parents did not agree to this marriage. Mr. Kamal was an influential person of that area.

In 1996, Asma gave birth to a girl child. She was very happy with her husband and newborn child. But all of a sudden, a big disaster happened in her life. Her husband was killed by miscreants. Seeing no way forward, Asma took shelter in her parents’ house and became a burden on her parents. As she was a young woman, everybody looked at her with greedy eyes. A well-wisher of her village named Abdus Salam helped her get a job at an insurance company. She left this job and joined an NGO. She felt insecure and lonely everywhere, and got married again. But her second husband was not good, so she divorced him.

In the year 1997, she took THP’s animator training. There, she realized that every human being is able and is the creator of her or his own fortune. She also realized that the fortune of women is not dependent only on the will of one’s husband, parents or God. It depends on the women themselves. To get rid of this mindset, women have to come forward and take initiative. Asma feels that only economic emancipation can establish the rights and dignity of the women in society as well as in the family.

After that, Asma trained ten women in tailoring and sewing and formed an organization with them named “Women Welfare Sangshata” (Sangshata means “society”). She also imparted training to 32 women on block-batik.

For economic emancipation of the women, she also realizes that education is an important factor and therefore established 3 adult education centers. In cooperation with other local animators, she is running these schools. Now, Asma is a well-known woman in the area. Her only dream is for the same realizations that she had to come to her society and to educate her daughter.

Learn more about our work in Bangladesh.