Jackson Chimangeni lives in Kauma Village near the Majete Wildlife Reserve in Malawi with his wife and six children. For many years, Jackson, like several of the residents of Kauma Village, relied on wildlife poaching for his income. However, not only is poaching incredibly damaging to the wildlife and ecology of the reserve, it is also an unsustainable source of income for the community members.

That is why, in 2011, The Hunger Project-Malawi partnered with African Parks Majete to bring its Epicenter Strategy to Kauma Village and other communities surrounding the wildlife reserve. The primary intention of the newly formed Majete 1 Chibwalizo Epicenter was to support communities in developing alternative sources of income and to combat poaching.

To support his family, Jackson continued to rely on poaching, charcoal burning and occasional side jobs until one day he was caught poaching on the wildlife reserve and sent to jail. Then, in 2014, The Hunger Project-Malawi introduced skills training sessions in tailoring, carpentry and tin smith. Jackson jumped at the chance to develop a new craft, becoming one of the first community partners to enroll and successfully complete a three-month training program in carpentry. After he finished his training, Jackson acquired a loan to buy tools and started plying his trade within the villages of the epicenter. 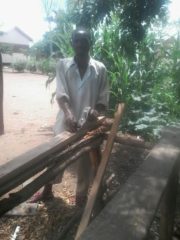 Today, Jackson makes door and window frames, beds, chairs and other pieces of furniture that he sells within and outside the epicenter. From his profits, he was able to build a house for his family and provide them with better nutrition. He currently employs two people to help him run his carpentry workshop. Jackson’s next plans are to replace the roof of his house with sturdier iron sheets, and to expand his business by buying dairy cows and selling milk.

Jackson is happy to note that he is not a unique case in his village. Since 2011, many of the households in the Majete 1 Epicenter have turned away from poaching and toward other, more sustainable sources of income. By participating with The Hunger Project-Malawi, community members gained education and skills to lift themselves out of poverty while protecting the wildlife reserve for future generations to come.