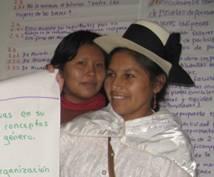 Clelia Regina Rivero began her activism at a young age. As a child, her family migrated from Huamanga, Ayacucho in Peru to Castrovirreyna, Huancavelica in order to escape political violence. Finding that their new home was just as volatile as the one they left, Ms. Rivero began working with her mother in district organizations to address issues of food security, an experience that opened her eyes to the need for grassroots efforts. She has been politically and socially active ever since and now, with Chirapaq, she works tirelessly for Quechua women’s rights.

Currently, Ms. Rivero is the President of the Departmental Federation of Mothers Clubs and Women Ayacucho (FEDECMA), an extensive network of women leaders throughout Peru that work in the defense of human rights and the struggle for economic prosperity.

“When I took office, I found [FEDECMA] nearly destroyed. There were women who were managed by male leaders who wanted to handle them politically. It was a very hard situation. With support from Chirapaq, we enlisted the founders, and with them, we began to strengthen the organization, starting with the recovery of the history of the organization and reflecting on: ‘Why did we organize? Where are we so far?’ We began our task of rebuilding the organization and we were again regaining confidence and respect.”

One of the organizations primary initiatives has been language. In Ayacucho, where Ms. Rivero works and resides, indigenous peoples who speak the Quechua and Ashaninka languages are often discriminated against by society and government alike.

“The most important activity…was to advocate for the regional government to approve the ordinance for the official adoption of the Quechua and Ashaninka languages. We started to sensitize the authorities and asked them to listen to the Defense of Indigenous Women.”

“With an Ayacucho Indian Regional Platform, we organized the International Day of Indigenous Peoples – this has given us great joy. The Quechua community now tells me ‘My Quechua language is okay. My clothes are okay. Now I know I’m important.’ These things have strengthened us.”

Ms. Rivero has had the opportunity to feel the successes of FEDECMA on a very personal level.

“The other day my daughter came home from school and told me, ‘The teacher told us that because of FEDECMA, now we have to study Quechua. So tell me more in Quechua.’ Because of the ordinance of Quechua language formalization, some schools are already trying to incorporate the language in the curriculum…In evaluating teachers, they have given preference to teachers who speak Quechua. That is good for us, especially because sometimes, when little kids do not speak pure Spanish, a teacher may not treat them well, and that often makes them not want to return to school.”

Ms. Rivero plans on continuing her efforts for indigenous peoples and, once concluding her FEDECMA presidency, returning to nursing school.