On the weekend of October 21-22, over 400 people from around the world gathered in New York City for The Hunger Project’s Annual Fall Gala, which this year marked the celebrations of our 40th anniversary! The weekend of events and panel discussions focused on the theme “Unleashing the Human Spirit,” shining the spotlight on our transformative work to end hunger since 1977.

Every year, the evening reception brings together Hunger Project supporters, investors as well as professionals from non-profits, governments and aid agencies. Given the special significance of this year’s celebrations, colleagues joined us from Bangladesh, Ghana, India, Mexico and Uganda to share in their own words how our holistic approach to ending hunger starts with women, mobilizes entire communities and builds long-lasting partnerships. 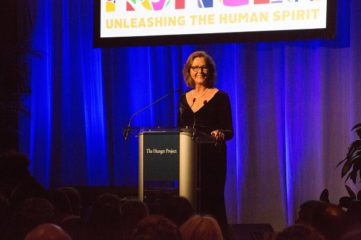 In her keynote address, Suzanne Mayo Frindt, President and CEO of The Hunger Project, underscored what makes the Hunger Project unique and touched on some of our accomplishments over the last four decades. “What is really important, yet far more difficult to capture, is the shift, that mindset shift — from no vision, no possibility to a vision of startling clarity and unimaginable possibilities,” she said, recalling a past visit to Bangladesh where she found “a deeper appreciation of how the end of hunger is at its core a human issue with women as the key change agents.”

The people empowered through our work in Africa are based in clusters of rural villages called epicenters. Today, there are a total of 122 active epicenters across the continent, reaching nearly 1.7 million people. Dr. Daisy Owomugasho, the Country Director of The Hunger Project-Uganda, told the audience of the importance of these epicenters and the effectiveness of the entire Epicenter Strategy across the continent. 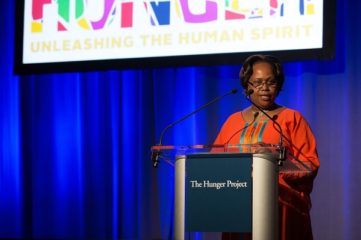 The strategy, Daisy explained, puts communities and people at the forefront of our efforts. “And it works,” she said, because we see the people in the villages where we work as amazing and committed partners. “Whenever there are issues to be addressed,” Daisy continued, “they make sure this is done immediately.” Daisy also highlighted the strong commitment of our partners at Uganda’s Iganga Epicenter to grow their own food and earn their own money “This agreement amongst themselves – holding each other to this pledge – this is not in any manual,” she said. 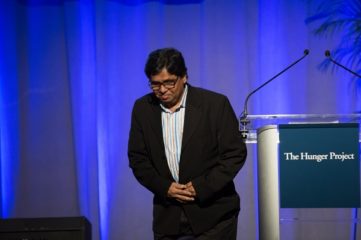 Jamirul Islam, who is a master trainer at The Hunger Project-Bangladesh, shared his experience bringing communities together in Bangladesh for the end of hunger. He spoke of Bangladesh as a country where the issue of hunger is real, and where our work focuses on truly “transforming the mindsets” of people and communities. At the heart of all this, he continued, “is our belief that local problems must be solved locally, because many of our problems are created locally.”

The Hunger Project’s work starts with women and recognizes that it is girls and women who hold the key to a better and more sustainable future for all humanity. This includes efforts to ensure girls stay in school to get an education and freedom to make choices. Patricia Osei Amponsah, coordinator of the Her Choice program for The Hunger Project-Ghana, shared her unique perspective working for the end of child marriage in Ghana. 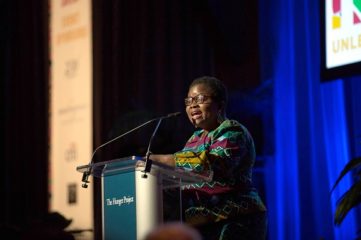 Her Choice is an international coalition of organizations that advocate and implement programs for the end of child marriage across 11 countries, including Bangladesh, Benin, Burkina Faso, Ethiopia, Senegal and Uganda. “Through the program, women and girls are already gaining a voice — a voice with which they can say, freely, what happens to their bodies,” Patricia said. “They can say whether and when sex will take place. Girls have a choice in whom, if, and when to marry.” 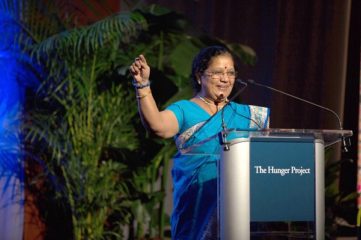 In India, we work with rural women and girls to empower them to make their own decisions and be leaders in their communities. Ganga Gupta, master trainer at The Hunger Project-India, reflected on her own life growing up as a woman in India and on some of the challenges women still face in the country. She said that because of widespread discrimination, she had found herself married at the age of 17 and was the mother of three by the time she turned 22. “At my husband’s home, I had to cook three times a day for nine people and had to wash everyone’s clothes, clean the house, and perform all the duties that a daughter-in-law has to do,” she recalled.

That’s when Ganga looked deep within herself and realized that it was time for change. “I realized immediately that no hero was going to come save us. I needed to be my own hero – we women needed to be the heroes for each other.” 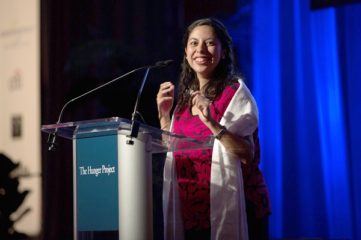 Today, half of the world’s population is under the age of 30. That is why it is essential that they are fully included in our global efforts to end hunger. Ana Lucía Marquez, Advocacy and Public Policy Manager at The Hunger Project-Mexico, emphasized this point in her remarks. “Youth are leading the charge and have been active participants in the implementation of projects on the ground and in the definition of their communities’ visions,” Ana Lucía told the audience. “Throughout Mexico, young people are signing up to be what we call catalysts — highly trained and committed volunteers who move their fellow community members to action.” 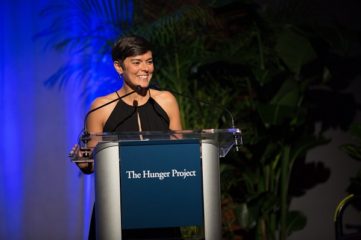 The event concluded with a call to invest by long-time Hunger Project investor and activist Jasa Porciello. “What if we can bend the arc of the moral universe right here tonight?” she asked. “You and me, on the 40th birthday of our audacious human endeavor – to make hunger history.”

The Gala was preceded earlier in the day by a special panel discussion highlighting The Hunger Project’s 40-year history transforming the world for the end of hunger. Our Executive Vice President, Dr. John Coonrod, hosted and led the event, which featured historical milestones and images along our four-decade journey, starting with the first volunteer back in 1977 up to today. You can watch the event here.

On Sunday, over 100 investors joined The Hunger Project’s Global Board of Directors in a dialogue focused on women and girls, with a special emphasis on global commitments to ending child marriage. 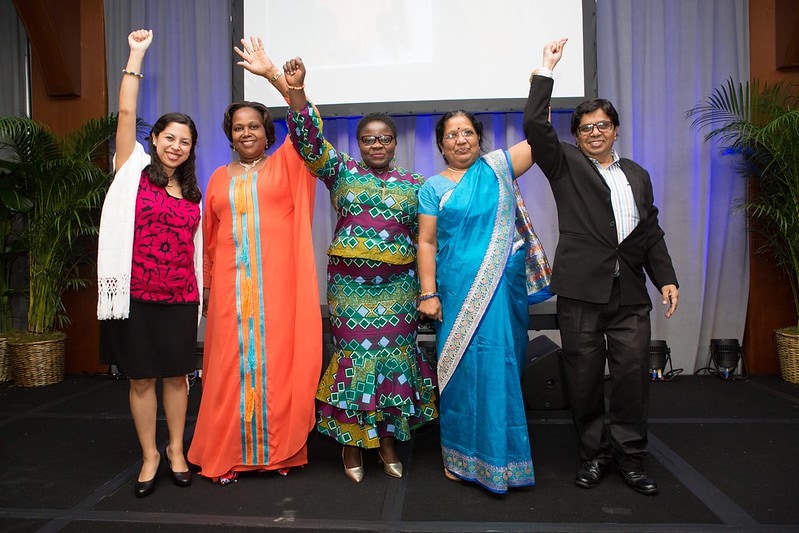