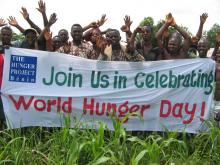 Millions of people are taking steps to end their own hunger in partnership with The Hunger Project and we’re celebrating! Join us in honoring World Hunger Day this Monday, May 28.

925 million people do not have enough food to eat to lead healthy and productive lives. Such chronic, persistent hunger is not due merely to lack of food. It occurs when people lack opportunity to earn enough income, be educated and gain skills, meet basic health needs and have a voice in the decisions that affect their community. And the brunt of this lack of opportunity and access to resources is borne by women who are primary caregivers, farmers and food providers to their families.

World Hunger Day is about raising awareness. And it is also about celebrating the achievements of millions of people who are taking actions every day to end their own hunger and poverty and make the journey to self-reliance.

On May 28 in London, legendary singer and UN FAO Goodwill Ambassador, Dionne Warwick will return with her friends for an incredible night of celebration with more than 5,000 people at the Royal Albert Hall in support of The Hunger Project’s work. The All Star Cast will include Sir Cliff Richard OBE, Alexandra Burke, Caro Emerald, Boy George, Tony Hadley, Joe McElderry, Katie Melua, Mica Paris, Rumer and the London Community Gospel Choir.

Debuting that evening will be the first public performance of One World, One Song, a wonderful project aimed to get the whole world singing together for a future free from hunger and poverty. Find out the story of One Song.

We are sharing an important moment in history: a moment that calls for the moral and practical imperative of achieving a world without hunger and poverty. We do not have the luxury of another century or more to get this done. Working together, we can make this vision a reality before time runs out.

Join the celebration of World Hunger Day! Here’s what YOU can do!