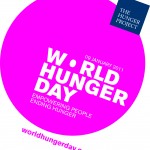 On Sunday, January 9, we kicked off a new year of action with The Hunger Project’s first annual World Hunger Day!

In honor of World Hunger Day 2011, The Hunger Project-United Kingdom (THP-UK) organized a gala concert featuring international singing star Dionne Warwick and an all-star lineup including Natalie Cole, Elaine Paige and Mica Paris! The performance included the full orchestra of the Southbank Sinfonia, a group of professional young musicians from all over the world, as well as the London Community Gospel Choir and more. THP-UK Country Director, Tim Holder, joined Dionne on stage for a song as well!

All in all, more than 100 performers and 2,000+ guests celebrated at the Apollo Victoria Theatre. All the leading performers donated their fees for the night to THP, and the design and printing of event materials were sponsored.

There are 925 million people suffering from hunger. World Hunger Day was about raising awareness of this situation. It was also about celebrating the achievements of millions of people who are already ending their own hunger and meeting their basic needs.

The event received great media coverage with articles in The Times (London) and on BBC Radio (check out more media coverage). During the week prior, chef and television personality Jamie Oliver kindly tweeted about The Hunger Project and as a result, we became one of the world’s top 20 trending topics on Twitter! A great way to put us firmly on the map!