20 Years of Sustainable Livelihoods in Uganda 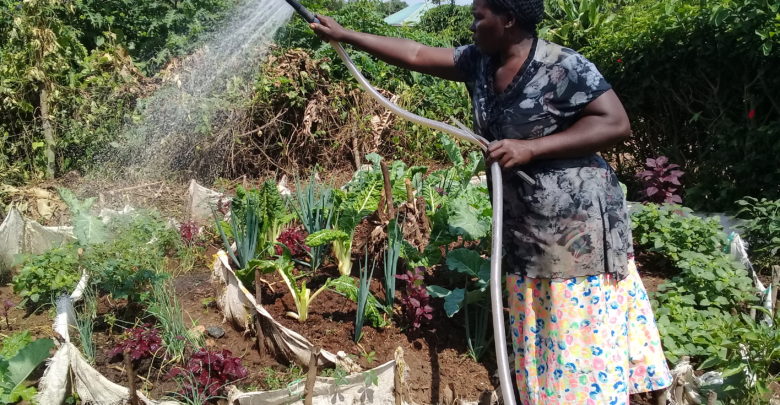 For over 20 years, The Hunger Project Uganda (THP-U) has prioritized mobilizing and training farmers to adopt eco-friendly farming methods as a step towards improving agricultural productivity and leading sustainable livelihoods.

Launched in Uganda in 1999, the non-profit organization set out to mobilize and empower grass-root communities to take to resilient farming practices to end hunger and poverty. Through its Epicenter Strategy, THP-U has since partnered with government and local farmers to embrace climate-smart and environmentally friendly practices like agro-ecology, to promote food security, income generation, gender equity, and environmental protection.

Uganda currently struggles with a high prevalence of poverty, food insecurity, and social inequality, gap experts warn, could potentially widen with the COVID-19 situation. A recent National Household Survey (NHS) by the Uganda Bureau of Statistics (UBOS) recorded an increase in poverty from 19.7% in 2012 to 21.4% in 2016. Reports also show that the country continues to grapple with consistent food insecurity and nutritional deficiency, as a significant percentage of the population suffers from acute food shortage. The Food and Agricultural Organization (FAO) in 2011 reported that Uganda had a Global Hunger Index (GHI) score of 16.7%, emerging 42nd in the world out of 81 countries ranked, with its hunger situation considered “serious”.

Analysts argue that the growth in poverty levels and food insecurity, coupled with continuing population growth and poor agricultural practices will continue to afflict the environment and provoke climate disasters. In recent years, Uganda has been hit by drastic weather changes, with devastating floods and landslides caused by heavy rains in the Elgon area and the western Uganda districts of Kasese and Bundibugyo. The rising water levels have also caused major lakes and rivers to burst their banks, causing mass displacement of people living on the shores.

Irene Naikaali Sentongo, the Head of Programs at The Hunger Project Uganda says the response to these challenges must be systematic and holistic, beyond emergency interventions.

“We have to reorder people’s mindsets to realize that climate disasters are not inevitable, that they are a direct consequence of their actions, which also means that they have the power to reverse their frequency if they change their livelihood methods,” she says. “The prevailing mindset of our farmers is to get quick returns. But the long-term cost of that is that much of our soils are getting depleted and there is increasing resistance to chemicals because of over spraying, which has caused degeneration of the biodiversity. Right now, soils in some parts of the country cannot sustain farming because of too much chemical use and deforestation. Consequently, seasons are changing, rain patterns are unpredictable and agricultural production and productivity are at its lowest,” Naikaali said.

Our Work in Uganda.

THP-U has since set up shop in 9 Districts, where it has set up 13 agro-ecological zones that it refers to as epicenters. In each epicenter, a diversity of programs is implemented according to the local community’s specific needs. Oftentimes, these programs include demonstration farms, an agro-ecology project, and a Savings and Credit Organization to offer low-interest credit to farmers. Each epicenter is supported and monitored closely by THP-U for a period of about 8 years after which it is handed over to the local government and local community in the area to run it on its own.

“All our work rotates around mindset change. We believe that if you’re able to change a person’s mindset, that person is then able to use the resources they have to transform themselves. The Epicenter Strategy, therefore, unites between 5,000 to 15,000 people in a cluster of villages to create a dynamic Centre where communities are mobilized for action,” Naikaali explained.

Established in 2014, the Namayumba Epicenter is located in Namayumba sub-county, Wakiso district.  One of the practices trained and practiced at the epicenter is agro-ecology, a set of sustainable agricultural practices that encourage biodiversity as each practice benefits the other in the eco-system.

Agroecology in the Namayumba Epicenter.

In addition to the agroecology projects, the Namayumba epicenter hosts a vocational skills training workshop where locals are taught how to make crafts, candles, liquid soap, and a training wing for adult education where older persons are taught how to read and write. For the rest of the community, the epicenter hosts regular training in financial literacy and business management. Each year, the facility graduates at least 30 people in diverse skills, says Ssekiziyivu Lamech, committee Chairman at Namayumba.

Happy Kenneth, an agroecologist with THP-U, warns farmers against the use of inorganic products like fertilizers, pesticides, and other chemicals arguing that they destabilize the ecosystem.

He says that these fertilizers kill microorganisms that would otherwise breakdown the mulch in the soil, just like spraying with pesticides kills bees that pollinate crops. “Bees are getting extinct because of using chemicals for spraying. These chemicals kill bees just like other insects. For chemical fertilizers, the danger is that they destabilize the garden. The chemicals affect agricultural production and sustainability because a chemical fertilizer feeds the plant, not the soil. So, the next time you plant, you must apply fertilizers again which increases production costs,” Happy cautioned. He says to counter the adverse effects of bad agricultural practices, farmers are encouraged to use locally made organic fertilizers that feed nutrients to the soil itself, so that future crops can benefit from richer and more nutritious soils.

“For example in the management of bananas, you can put moringa trees to improve soil health through nitrogen fixation, while its leaves also decompose into soil nutrients. In the same garden, you plant elephant grass on the boundaries, which provides both silages for feeding animals but also grass for mulching. The droppings of these animals fed from the elephant grass and banana peelings are used as fertilizers in this same garden such that the whole system supports each other.” Happy explained. Agroecology is motivated by issues like environmental conservation, the biodiversity of the ecosystem, building resilience to food insecurity and nutritional deficiency, protection of traditional varieties, improving rural livelihoods, and improved wellbeing.”

In Namayumba, THP-U has already made some grateful converts. 54-year old Safina Nambooze is one of them. She told the cooperator that THP-U trained her on how to make organic anti-pest sprays, which has reduced the use of inorganic chemicals in her farming. “As a family, we now eat safe, fresh vegetables from our backyard garden and this has improved the health of my family. My six grandchildren and husband now no longer have complaints of small illnesses caused by eating chemicals and our diet has also improved,” she says. Nambooze also says that with their new knowledge, their cost of production has substantially gone down since they are able to preserve seeds from the past season and no longer have to spend on buying manufactured.

In addition to new knowledge, Nambooze also acquired a loan from Namayumba Epicenter SACCO, with which she bought two acres of land and a cow. With more land, Nambooze and her family last year were able to grow and harvest two bags of coffee and beans to feed her family. Her cow has since given birth to 3 others, and now the family of 6 are looking to start earning from dairy farming. She says the epicenter has taught them the importance of planning: “As a family, we now have less financial pressure and I am able to reduce the burden on my husband who is 87 since we now have alternative sources of income through the increased productivity of our farm,” she said.

27-year-old Daniel Lutaaya shared a similar story. He says that the epicenter taught him how to optimally utilize his land on which he only kept dairy cattle. Now, he also grows vegetables and has added on rabbit farming.  Like Nambooze, he says, he has long ceased to spend on fertilizers:

He says that at home, the family looks after 8 rabbits, which also help support the ecosystem. “Their urine is used as both a fertilizer and a pesticide. So, the first seven days after harvesting, the urine can be used as a pesticide while its droppings can be used as a fertilizer.” He also says that rabbits provide white meat, which is recommended by health experts. Lutaaya says he now also rears 5 cows for which he grows fodder on half an acre of land, part of the three acres he owns in Damasco village, Namayumba town Council. Part of this grass is dried to make hay which supports the cows during the dry season, enabling a thriving zero-grazing enterprise.

Naikaali says such diversification and eco-friendly production is the way to go.

“Our forefathers practiced agroecology and what they earned sustained their families because they were food secure! The food was also more nutritious but now we are seeing a lot of obesity setting in children because of what we feed them, which has residue chemicals used in spraying. When ingested, these chemicals contribute to our reduced life span,” Naikaali says.

She warned farmers to be cautious with agro-inputs in the market, arguing that many of them do not meet minimum quality standards and are mostly marketed with a motive for profit. She noted that these pose a danger to local seed varieties, which THP-U is moving to protect by setting up seed banks at the Epicenter where farmers can access them on loan.

“When they take one kilogram, at the end of their harvest, they bring back one and a half. This is put to ensure the development of the seed bank to guarantee sustainability so that the capacity of our seed bank increases to scale up to other farmers in the Community. This ensures close and easy access of seeds to the community,” Happy said.

Ssekiziyivu Lamech, who heads the committee that runs Namayumba as Chairman told theCooperator that they’re now planning to get their farmers certified to establish an organic food market in Namayumba town, which he says should attract better incomes and distinguish them from other inorganic food sellers in the same market.

Ssekiziyivu told theCooperator that the epicenter has a particular focus on women and girls who are taught leadership skills to play a more active role in their communities. One of the women beneficiaries – Lydia Jemba was recently appointed Kabaka Ronald Mwenda Mutebi’s special envoy to Namayumba Sub-County because of the community organization skills she exhibited after graduating from the Epicenter.

The epicenter SACCO is also chaired by a woman, and women constitute over 65% of its 1200 membership. Lydia Jemba, the Chairperson of the Supervisory Committee of Namayumba Epicenter SACCO says that women have embraced the culture of saving and that through borrowing, they are able to engage in productive business and to support their families. She told theCooperator that the SACCO had benefited from Shs.100million revolving funds from THP-U, which was used to set-up the Wakiso Women Food Farmer Initiative.