From Resignation to Prosperity with Cassava 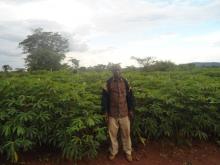 Jacob Opua, 53 years old, joined THP-Uganda’s Kiboga Food Security and Food Production Cassava Multiplication Program in 2008. Before joining THP, Jacob invested all his time in cassava production but had made little progress in increasing his agricultural productivity and income. In hindsight, he attributes the challenges of overcoming these obstacles to a mindset of resignation, poor cassava varieties, pests and diseases.

Now Jacob is a model farmer for Kiboga Epicenter and the entire district. He attributes much of his success to joining THP-Uganda through Kiboga and attending Vision, Commitment and Action (VCA) workshops. Since joining THP, Jacob has gone on to train other community members how to become food secure. He says that, in Kiboga district, he is an academy of sorts, where people come from all over to learn about the various varieties of cassava and agronomy practices. By just looking around his farm, which has different varieties of cassava, the self-taught agronomist can differentiate between the varieties of cassava and tell when a particular variety is in trouble and in need of care. Two years after joining THP-Uganda, Jacob boasts over six acres in use for cassava production. He plans to plant more as he revives the art of growing cassava that was threatened by Cassava Mosaic Disease and bacterial wilt in recent years.

As a member of Kutetenkanya Farmers’ group, Jacob was selected as a host farmer for a Participatory Variety Selection program under a Catholic Relief Services Cassava funded project. He noted that, without the partnership between THP and the Catholic Relief Services (CRS), his household and others in the village may still be food insecure and impoverished.

In his own words, Jacob asserts, “I am what I am today because of The Hunger Project-Uganda.” Last year, Jacob earned close to 3,000,000 Ugandan shillings (US $1,150) from the sale of cassava tubers and cassava flour. Beyond meeting his family’s daily food demands, Jacob has, with this income, commenced construction of a three-bedroom permanent house and paid the school fees for his three children in secondary school.