Believing in Success at Every Age 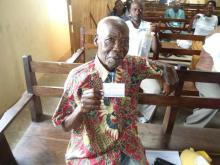 Mzee Erick Kafuruma is 74 years old, a retired soldier and agriculturalist. He started attending THP-Uganda’s Vision Commitment Action (VCA) workshops in 2005 when he heard about the training in his village of Nchune Parish where Mbarara Epicenter is active. He is very passionate about change in the community and had always looked for ways to inspire people to work hard, adapt to change and show progress in the community. He says that after retirement from the army, he needed something to keep him busy and give him direction. He adopted organic farming and worked to mobilize people to be part of his projects. Unfortunately, most community members were unwilling to participate and Erick worried they were being short-sighted.

“When The Hunger Project started training in 2005 in my village, from the first workshop I was in attendance and fell in love with the five steps of ending hunger and poverty.” Erick at last had found a group of people who thought like he did. He encouraged his wife to join the microfinance group so that they could keep in touch with all the progress and change in programs.

He attended all trainings in the community and, with his wife, they used the money from the microfinance program to improve their fruit garden. Erick still wants to bring more people to know THP so that he can create sustainability and mobilize people to adopt cost effective, high-yielding agricultural practices. It is a difficult mission and some communities members have not always taken him seriously.

When THP-Uganda announced a re-mobilization of partners for programs, Erick was selected an animator, and given the privilege of influencing people through the epicenter strategy. He says the people of THP have looked beyond his age and believed in him enough to give him the opportunity to work with them, to make changes and create projects at the epicenter. They are in the process of setting up an oyster mushroom garden at the epicenter, as well as an apiary and a fruit garden.

He thanks The Hunger Project for the epicenter strategy and pledges his commitment, time, energy and resources to work with the animators and leaders selected to see the project come to be self-reliant.