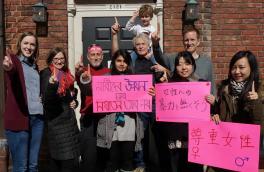 One in three women on the planet will experience violence in her lifetime. On February 14, 2014, The Hunger Project rose up in support of these one billion women. The Hunger Project joined the One Billion Rising (OBR) movement to RISE, RELEASE, DANCE, and demand JUSTICE for women and girls around the world.

Our #ReasonToRise is simple: women are leaders in families and communities; contributors to the economy; and strong agents of change around the world. We strive to empower entire communities where women and girls can lead lives of dignity without fear of violence.

The Hunger Project staff around the world took part in One Billion Rising this year and sent in stories and images from their experiences. Here’s how we rose up:

In Washington, DC, the Hunger Project staff joined Founder and Artistic Director of V-day, Eve Ensler on February 11, 2014 for a One Billion Rising kick-off at the US Congress Rayburn House Office Building. Watch the video of Eve Ensler’s speech. After the February 14 event at the Supreme Court was canceled due to weather, The Hunger Project had a “mini-rising” on Decatur Place (pictured above) to stand in solidarity for women and girls around the world.

In London, The Hunger Project-UK gathered in the rain in Trafalgar Square for a mid-day rising. Check out some photos on THP-UK’s Flickr and read more about OBR in London on their blog.

The Hunger Project-Australia CEO Cathy Burke reflected on the work of The Hunger Project in India and the path to progress through elected women leaders. Cathy passionately explained, “It was a challenging experience being in Madhya Pradesh. Even though I’ve seen our work in India many times, something got under my skin. The conditions are so set against women. It’s incredibly disturbing. And yet, the human spirit blazes fiercely in the work we are doing. Our partners continue to amaze and humble me.”

One Billion rising events took place in over 200 countries globally, and was complemented by an incredible presence on the web and social media.

Learn More about The Hunger Project’s Work to End Violence Against Women: