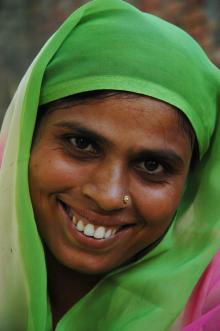 Khusboon Khatoon is a Ward Member in a post reserved for women in her gram panchayat (village council) in Siwan District in India. She is 32 years old.

Khusboon Khatoon, was a child bride at 12 years of age. She was widowed early. However, even though Khusboon’s Muslim community is not against the remarriage of widows, she, in consultation with her mother-in-law, decided to stay on in her marital home. Khusboon single handedly worked and looked after her mother-in-law and two small children. She recalls that following her husband’s death she lived a life of misery, because widows in the village community are shunned and cannot participate in the community festivities such as marriages or religious festivals.

The community was impressed by her grit, dedication and hard work and asked Khusboon to stand for elections. Khusboon says she seized the opportunity as in her words “I always wanted to do something so that other women do not have to go through such suffering.”

After becoming elected, Khusboon participated in The Hunger Project’s (THP’s) Women’s Leadership Workshop (WLW). The workshop provided Khusboon the first inkling that she could actually work for the betterment of women who had undergone similar child marriages and widowhood like herself. She was given encouragement and motivation to fulfill her dreams. Following the WLW, she learned to read and write.

Last year, Khusboon undertook a survey of 1,500 homes in her constituency to learn about the impact of domestic violence in her community. Her survey revealed the following: 20 women had been abandoned and returned to their maternal homes; 20 women had gone back to their maternal homes and then returned; seven women lived alone; three women had committed suicide by swallowing poison; two women had set themselves on fire and died subsequently; and one woman had jumped into a well with her children. Only three women had maintenance under Criminal Procedure Code CRPC 125 (a law requiring a monthly allowance). These cases had been suppressed, and none of them had been registered with law enforcement agencies.

After discovering this, Khusboon organized a three-day legal training for 45 women on their legal rights and on domestic violence. Khusboon also convened a Gram Sabha (general assembly) to hear the case of a deserted woman. This is notable, as these issues are never taken up in these fora. She has, in addition, ensured that BPL (Below Poverty Line) cards (for food rations), disability pensions, and widow pensions are given to the appropriate people.

Khusboon has resolved many domestic violence cases, and she has even brought some cases to the District Courts. Now, people in her constituency call upon her to resolve matters of domestic violence.

Learn more about our work to empower elected women representatives.