No Silence on Violence Against Women 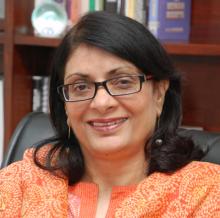 I am honored to share my thoughts on violence against women. Putting an end to such violence is crucial if we want to lead lives of self-respect and dignity.

While on one side, India has made great strides in the information technology sector, participated in the World Economic Forum meetings at Davos and so forth, all of us in the world saw another India last month when mass protests against gender violence led by youth and senior citizens ― beginning in Delhi, then engulfing the nation and beyond ― created a historic moment. Voices of women and diverse constituencies were unified, forcing the State to take political notice.

With promises of law reform, dedicated parliamentary sessions and police reforms, the improvements to women’s safety in our towns and villages being made during this time will go down in the history of my nation as a paradigm shift in how we look at women in this country.

Let me share that violence against women does not only include sexual assault. Here in India, we have it in all shades and forms: acid attacks, honor killings, domestic violence, dowry deaths, female infanticide, abuse, Sati (the practice of a recently widowed woman immolating herself on her husband’s funeral pyre) and commercialization of women as a product by the media.

Women throughout the ages have dealt with violence in their day-to-day lives. We have a declining sex ratio nationally. Here in Delhi itself, we have 866 women to every 1,000 men. Amartya Sen, in his various discourses, has talked about the “missing girls.” Let me tell you, it is cultural and embedded in our lives and on the 16th of December 2012 it exploded in our faces as we witnessed it in our living rooms with news coverage of the rape of a female student riding a bus through Delhi.

I come from and work in a rural setting. I work with elected women leaders who are constantly facing hostile, patriarchal and violent environments. On top of it, if they are Dalit (caste formerly described as “untouchables”), the violence is of an even deeper nature.

The Hunger Project’s participation in the 16 Days of Activism Against Gender Violence Campaign involved 4,000 elected women leaders covering eight million people across seven states of India. It unearthed the reality that women live with this day-to-day violence, and its threat, all the time. Candlelight marches, talks under a tree, signature campaigns, Dedicated Gram Sabhas (general assemblies), dialogues and interaction made it clear that we need to:

The reality today is that women are breaking out of the shackles of cultural discrimination and coming out in large numbers from the middle class to work as professionals in diverse areas of work. That is what Nirbhya (the gang-rape victim in Delhi) was trying to do. She had her dreams and was trying to pursue her happiness and carve a life of rights and dignity for herself and her family. What happened to her is not one case, as is evident now to all of us.

Let me state that in this entire economic boom in our country, we forgot about women and the way we look at and ill-treat them. Let us not get seduced by the booming economy of the other India. This will never take us as one nation together moving towards development.

Therefore, what do we need to do?

I will end by saying that it is important to continue to engage, intervene, monitor and demand a violence-free attitude, environment and culture. The momentum created at this point must retain its force until promises of change are kept.