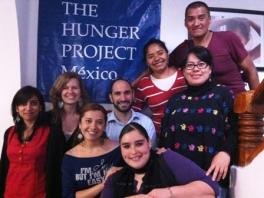 In March 2013, a Columbia School of International and Public Affairs (SIPA) team of six split into two and embarked on field visits to two country offices: Mexico and Benin. In addition to seeking a better understanding of The Hunger Project’s (THP’s) mission and activities on the ground, the Team went to test a new communications tool with Monitoring and Evaluation (M&E) officers in the field and gather feedback to better shape the tool and overall communications strategy. Read their review of the experience.

The SIPA Team and the M&E officers discussed measuring empowerment at length. Empowerment, an abstract concept that changes with each situation, is hard to measure. In Mexico, while the Team and M&E officer did not reach a consensus on its definition, they did realize how complex reality is and the difficulties of conveying that to stakeholders who are far removed from this reality. When the SIPA Team visited a THP artisan women’s cooperative in Chiapas, Mexico, one of the team members asked THP field staff how they measure empowerment. They revealed that although they cannot definitively provide a solution to this question, they could explain their own personal observations of empowerment. Five years ago, the cooperative’s textile store was falling apart: the ceiling caving in, the floors cracking, the colorless walls crumbling. A board ran the cooperative without allowing the artisans to have a say in how the business was run. The women artisans would only receive payment every year or two, while barely scratching enough together for their families to eat.

After THP initiated a Vision, Commitment and Action Workshop (VCAW) as well as business administration workshops in the artisans’ communities, the women, who were once fearful of confronting the board and contacting an architect to repair the store, began to speak up more and more. The artisans finally raised the money, called in an architect, and demanded more responsibility in the administration of their business. Now, the store looks like an artisans’ shop: the vibrant clothing and scarves are folded and organized according to color, each piece has a tag attached with information on the artisan who created it, the community where it came from, and the price of the item, a large banner of smiling women adorns the wall, and the store is clean and welcoming to visitors. Store clerks are attentive and keep careful records of transactions, and artisans receive payments every month. As the field staff member noted, the physical appearance of the store was a testament to the women’s empowerment because, “They did it. They made it happen.”

In Benin, a woman told the SIPA Team that her children were not in school before she participated in THP’s projects. She enrolled in a THP women’s literacy program in the local language and participated in the epicenter’s micro-credit program. Now she can send her kids to school. Before, she could not afford a bicycle, but now she owns a motorcycle. Now, this mother feels proud for learning how to read and write and for putting her kids in school. While these emotions are not entirely quantifiable, they reveal this woman’s feeling of self-empowerment, an objective at the heart of THP’s programming.

The M&E officers must determine how to tell stories of empowerment such as these, not only through numbers but also words, in order to demonstrate results partner communities and also to convey impact to stakeholders. Thus, M&E officers are in a challenging position. They must present data that is digestible and portray a picture that is easy to comprehend, all the while measuring the real impact of projects on the eradication of hunger and poverty. M&E officers have to get the at the heart of what is really happening in the community, and one of the ways to do this is to collect individuals’ stories of self-empowerment. Anecdotes, while timely to collect, can be forceful evidence that circumstances are changing. The fact that a formerly disempowered woman has the opportunity to tell her story reveals that she is becoming empowered. Perhaps, there is no stronger evidence that a woman is happier, healthier, well fed and vocal than hearing her testimonial of how her life changed after THP. Numbers only go so far, they only capture what’s happening on the surface, so M&E officers should delve deeper in order to determine if THP’s programs are really scratching away at the epidemic of hunger and poverty.

Stories reveal nuances that numbers can’t, and they allow M&E and program officers to reflect on a program’s impact and alter it in a more specific way, based on the interviews and testimonials of THP’s partners. THP M&E officers are working towards collecting more robust and richer data, through developing tools that measure outcomes, the second level on the Theory of Change, but they have a ways to go. Instead of working through these challenges alone, we hope that the M&E officers discover that the communications strategy and sharing platform give them an opportunity to take on these challenges together. THP M&E officers can be daring in their methodologies if they know they have a support network of officers who are also navigating challenges of PM&E and pioneering methods of measuring empowerment.

Read about a SIPA project in Bangaldesh.