A Quechua Woman Leading by Inspiration and Clear Vision 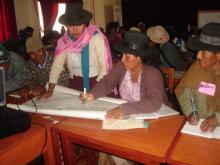 Lola was born on July 31, 1963 in the Quechuas community, which is in the Puna municipality and Linares province. She is 46 years old, and studied in her community’s school up to seventh grade. She is married and is a housewife.

From an early age, Lola was dedicated to promoting women’s participation and groups and supported the creation of the Association of Women Leaders, which subsequently led to The Bartolina Sisa de Potosí Women’s Federation in 2006. Along with several organizations, Lola worked to create the Quchas borough, which, in the upcoming municipal elections (April 2010), will be a new Potosí municipality that will elect their own authorities.

In 2007, Lola discovered The Hunger Project (THP) Leader Training Program through an agreement signed with The Bartolina Sisa de Potosí Women’s Federation. Her husband supported her greatly; he visited the ACLO offices to determine when the training would start. In August 2008, Lola joined the training program for leaders.

Since attending the leadership training workshops, Lola has shown increased dynamism in her support of the women’s organization that she manages as well as in seeking better health care and education in her borough. Above all, she encourages other women to be trained.

In a male-dominated “macho” context, where women are undervalued, her main learning experience is having overcome her fears and strengthening her self-esteem. Now, Lola operates as a better leader and has strengthened her core values. Lola has more information and more discretion in exercising her responsibilities. In particular, she has tools to mobilize organization participation, proposal development and the management of social control toward municipality government. Her participation in training events is active and encourages other women to continue the training process.

As the leader of the Quechuas Women’s Organization in 2009, Lola prompted and was part of the organizational process to create a Primary Education Center for distance learning by radio, and she is being trained as a teacher guide to help overcome the low level of education of farmers and peasants. Lola prompted another woman leader to assume the post of “executive secretary” (highest authority) in the borough’s women’s rural organization. Lola has had an influence on three women assuming leadership or management positions in The Bartolina Sisa de Potosí Women’s Federation.

Support the training of other women like Lola. Invest now!