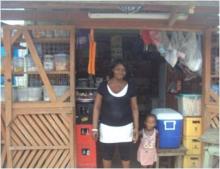 Matilda Aba Tibuah was born in 1975 at Ekurobadze community in Taido Epicenter in the Mfantseman Municipality of Ghana. She completed Junior High School at Ekurobadze Roman Catholic School. Matilda is now married with four children.

Matilda was a peasant farmer and was involved in the cultivation of maize and cassava before her encounter with The Hunger Project. According to her, she was not able to generate enough income from her farming work to support her household due to poor yields. Her husband was the only one providing money to sustain the home and as a result he was always complaining of the burden on him. She did not have complete happiness since she felt incapable of supporting the running of the home. Her husband made most of the decisions concerning her home since he felt he was the one providing for the family.

As stated by Matilda, “I began seeing and understanding things differently when I encountered The Hunger Project. The Hunger Project brought some confidence into my life that I can do better than I am doing now.”

After participating in Vision, Commitment and Action (VCA) and food security workshops, Matilda was inspired to work hard to generate some income to support her family. She applied the principles she learned from the workshops to her farming business. She also benefitted from the microfinance loans from The Hunger Project-Ghana. As a result of all the opportunities she had, she currently has two acres of maize and cassava farms. She also started a provisions shop as another way to generate income.

According to Matilda, her life has changed and she can now support her household expenditures after receiving loans and educational sessions from The Hunger Project. She now earns the respect from her husband and her family.