Ssisa Rachel Leads Efforts to Improve Education in Her Community 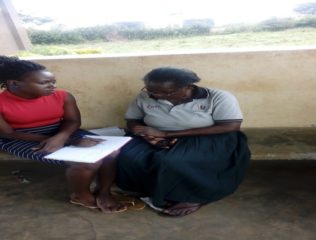 Ssisa Rachel, 56, began her career as a nursery school teacher. When The Hunger Project-Uganda arrived in her village of Nalondo B, in the Mbale Epicenter in eastern Uganda, Ssisa was one of the first to participate in activities and training sessions. Driven by her passion for education and children, Ssisa contributed many ideas and innovations to improving local schools, including her own.

When Ssisa first moved to Nalondo B, there were no nursery schools in the entire sub-county. Concerned as both a teacher and a mother of two children, Ssisa began speaking with her neighbors and other community stakeholders to see if there was any interest in opening a nursery school for the area. She was greeted with an overwhelmingly positive response.

The sub-county chief eventually gave her a room in his home to serve as a nursery school for the children in the community. “It was an exciting moment, I must say,” Ssisa remembers with a big smile. Inspired by her momentum, Ssisa ran for election to a counselor position in the Bumasikye Parish in 2006. She lobbied other parishioners and community leaders and was able to obtain the funds needed to start her school.

These days, Ssisa serves as the Head of Education on the Mbala epicenter committee, and continues innovating to improve education in her community. She also works with The Hunger Project-Uganda as Head of Functional Adult Literacy, educating community partners and empowering them with the literacy and numeracy skills necessary to grow their businesses.

“It was really a dream come true,” Ssisa remarked about her career to date. Ssisa notes that The Hunger Project has been able to change her community in all different aspects of life. With her fellow committee members, she continues working to meet the goals and objectives of The Hunger Project in their epicenter, and hopes to eventually achieve self-reliance.

Literacy and Education in Uganda