One Plant Nursery Provides for a Family and Empowers a Community 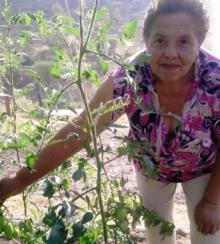 Josefina Martínez belongs to the community Sauces de Abajo from the municipality Jiménez del Teul in the state of Zacatecas in Mexico. Her small community has a population of about 250 people with few local jobs available. Like many people in her community, Josefina had no income other than the money her family living in the city of Zacatecas would send to her. She worried constantly about the future of her children in this environment – her daughter was studying and her son couldn’t find a job.

Determined to support herself, Josefina started to work with The Hunger Project (THP)-Mexico in 2009. She worked with her income-generating group to create a vision for a nursery that would produce and sell ornamental plants. They called the project Flor Feliz (“Happy flower”). In the same year, and with the support of a local development agency from THP-Mexico, the group Happy Flower obtained funding from the Secretary of Social Development (SEDESOL) through the program Opciones Productivas (“Productive Options”), a co-financing fund model, for the implementation of the plant nursery. But the project had its challenges. When the group began it consisted of four people, but the prospect of investing money in the project, as well as time, drove two members to leave.

Eventually, the nursery began turning a profit and, currently, it produces vegetables (chile, onion, red tomato and tomato peel). The nursery has done so well that it needs to expand. Josefina’s group is in the process of refurbishing the space to increase workspace. Based on the strengths of this plant nursery, this project has the potential to become a model for replication in the state of Zacatecas.

Following the vision for the nursery was a risk but Josefina was empowered to continue by the strength of her community and the partnership of THP-Mexico. Now, the nursery is growing not only enough to provide food to her family but enough to sell the rest of the harvested vegetables at the municipal market. Josefina now she sees herself as an example for the rest of the family.