Now I Say What I Have to Say 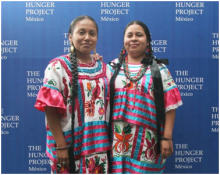 Since The Hunger Project has arrived in Patricia Martínez’s community of San José Tenango, Oaxaca, she has been able to reflect on its influence in her life and at the community level:

Along the way we’ve been with THP we have faced strong obstacles, gossip, everything, but … I have tightly kept my community’s trust and confidence in myself.

I have seen the difference. From the beginning we did not know about gender equity and men were the ones who participated more, but since we started working with THP this has changed because now everyone has an opportunity to participate: the elderly, young people, men and women. Even children have participated in our meetings.

Personally, I am satisfied and very happy with myself, because I’ve gained self confidence for the good of the community and for those who come (future generations) … we have the future ahead and we want to achieve those visions, together with the community.

In Patricia’s own life, she has been able to observe many changes:

I used to not go out, not talk. I was not saying what I thought. I wanted to participate but I did not express myself … because of insecurity, fearing that others would judge me or criticize me by not saying things [correctly].

As a result of community outreach pertaining to gender parity in San José Tenango, Patricia feels more aware of her rights:

Well now we know, we are aware that as a woman and as a girl, what you think is worthy, your knowledge; your ideas are as valuable as the one of men.

We have freedom of speech. We know it because the word is given to the woman, and the word is given to man. Whatever you say, no matter if you are man or woman, everybody listens and talks together and exchanges ideas, opinions and collectively achieves a good conclusion. Now there is a real opportunity for equal participation of men and women in the family.