Microfinance Fosters the Development of a Local Leader 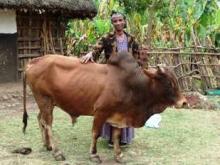 Genet Mosa is a 37-year-old woman living in Limich Meqicho kebele (ward) in Ethiopia and a partner at Mesqan Epicenter. She lives with her husband and five children, two girls and three boys. One of her daughters has completed tenth grade while the other attends third grade. Two of her sons are in ninth and second grade respectively and the third is just two years old.

Genet is a dynamic woman who continually strives to improve her family life by embracing every new opportunity. So, when The Hunger Project (THP)-Ethiopia invited her community to a Vision, Commitment and Action Workshop (VCAW) in order to introduce THP’s objectives, methodologies, principles and programs of development intervention, Genet attended as a representative from her kebele. She was so enthusiastic about THP-Ethiopia’s objectives that she was eventually elected as Vice Chairperson of Mesqan Epicenter Committee by the community members.

When THP-Ethiopia organized a VCAW focused on microfinance at her kebele, Genet was the one who mobilized the women to attend the workshop. She actively participated in the workshop and was later elected as chairperson of the African Women Food Farmers Initiative (now titled the Microfinance Program). After organizing her fellow women to successfully meet the requirements of loan partners, she attended pre-loan trainings for both saving and credit management and income-generating activities. In September 2010, the MFP at Mesqan Epicenter was recognized by the local government as an official Rural Bank and named Addis Alem Saving and Credit Cooperative (SACCO). Genet is now a chairperson of the SACCO.

Genet participated in the Microfinance Program not only as a leader, but also as a loan partner. Her first loan was for birr 300 (about US$18), which she used to purchase a calf and improve her existing petty trade income-generating activities. She saved any profits weekly as a form of iqub (a traditional way of saving). When the loan repayment date approached, she had over birr 400 (about US$24) saved in her iqub and made the repayment on time.

After successfully repaying her first loan, Genet felt empowered to expand her income-generating activities and proceeded to take out a series of loans, all of which she repaid in full and on time, building her credit and strength as a business woman.

Genet’s second loan of birr 600 (about US$36) was used to engage in the trade of pepper in the markets. She and her fellow MFP partners were successful enough at this point to engage in their own weekly savings group in addition to the loan partners’ monthly group savings through the MFP. Genet was saving birr 48 (about US $3) each week and, by the time the loan repayment was due, had made a personal profit of over birr 1,200 (about US $71).

A third round loan of birr 800 (about US $48), expanded Genet’s pepper trade and allowed her to engage in handicraft trade. Genet’s income was now able to cover household expenses including her children’s school materials and clothing. She was also able to save birr 500 for a holiday and retained a profit of birr 600 (about US$36) after loan repayment.

A fourth round loan of birr 1,000 (about US$60) allowed her to continue to diversify her income-generating activities. In addition to her pepper and handicraft trading, Genet rented land and began to cultivate wheat. She purchased 50 kg of fertilizer and will be able to obtain three to four quintals of wheat from her crops, estimated to sell for birr 2,000 (about US$120) in current crop market price.

Recently, following the successful repayment of her fourth round loan, Genet took a fifth round loan of birr 1,200 (about US$71) and continues to engage in pepper and handicraft trade. The calf purchased with her first round loan is now a full-grown ox used to plough the wheat crops, which are plentiful enough for both her family’s consumption and for sale.

Genet’s savings both within her microfinance group and her traditional iqub have allowed her to build a pit latrine in her compound for sanitation, make plans to build an iron-roofed house and begin establishing her own grain-mill, shop and restaurant.

In addition to her extensive savings and credit activities, Genet has attended various trainings conducted by the THP’s Microfinance Program with various government sectors and non-governmental organizations. She has participated in trainings on leadership, nutrition, environmental sanitation, HIV/AIDS and gender, legal rights of women, family planning and traditional birth attendants.

Eager to empower the women in her community, Genet has engaged in voluntary activities in her kebele teaching women in literacy classes. She has also reached out to other communities and participated in experience sharing events at Debre Libanos and Jaldu Epicenters, spreading her enthusiasm to other communities in THP-Ethiopia.

Genet is very happy and proud of how well she has managed her income-generating activities and improved the lives of her family and community.

Invest in Genet and thousands of other women leaders like her: Give now!