Leader in Ghana Increases Her Income by 600% 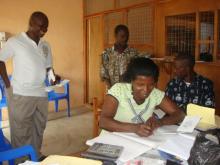 Comfort Kissiwaa is 49 years old and a native of Nsuta in the Nsuta-Aweregya Epicenter in the Eastern Region. She is married with five children (four girls and a boy). She is educated up to the secondary school level. Prior to joining The Hunger Project (THP)-Ghana, she was working as a kindergarten teacher at Nsuta with an average annual income of GHC 140 (US$110) and was also engaged in farming to supplement her income and for subsistence.

Comfort joined THP-Ghana in 2000 after a mass Vision, Commitment and Action Workshop (VCAW) at Nsuta, which, according to her, had a remarkable impact on her and how she perceived life, generally. Her entry point into THP was the Women Empowerment Project (WEP), through which she began to gain prominence in the community as a result of the opportunity she had to educate people on their civic, legal and health rights.

Subsequently, following her participation in several AWFFI VCAWs, she joined an AWFFI credit group in her community through which she received loans five times for the expansion of her farming activities. Comfort was later elected as the Secretary of the Nsuta-Aweregya Epicenter Executive Committee. In 2004, she was appointed Manager of the Epicenter Community Bank, after passing a competitive interview that was conducted for the position.

Reflecting on her past and the positive transformation that has taken place in her life, Comfort now believes that almost everybody has unlimited innate potential and abilities that can be realized with the right mindset and the necessary support. She said her association with THP has helped to change her from a timid and shy person to an outspoken person, full of confidence and drive.

Apart from the positive changes that have taken place in Comfort’s personal life, her involvement with THP has had significant impact on her family as well. The loans that she has received from THP have enabled her to expand her farming activities which have resulted in increased food production and income. Her annual income, which used to be about GHC 140 (US$110) only, has increased to approximately GHC 1,000 (US$787), including what she earns as the Manager of the community bank. With the increase in her income she provides support to her husband to feed, clothe and educate their children. She has also gained respect in the family and now participates in family meetings.

As the Manager of the community bank, Secretary to the Epicenter Executive Committee and a WEP animator, Comfort plays a key leadership role in her community and has even become a role model for most people, especially young girls. Through WEP educational activities, she has encouraged several parents to send their children to school, particularly the girl children, which has resulted in an increase in the number of girls enrolled in basic schools in her community. She has also contributed to either resolving or referring many marital disputes to the state agencies such as the Department of Social Welfare and Commission on Human Rights and Administrative Justice (CHRAJ).

Comfort is truly an example of how THP’s work is empowering women and causing a positive change in their own lives as well as those of their family and community.