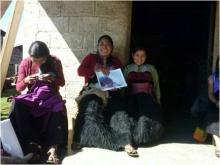 Ricarda is 18 and the youngest of a large family residing in San Juan Chamula, Chiapas.

Ricarda is among a group of many catalysts who participate in The Hunger Project-Mexico’s initiative called “The Sun of the Butterflies (El Sol de las Mariposas),” a program funded by The National Commission for the Development of Indigenous Peoples’ (CDI). The project includes trainings that cover themes such as human rights, women’s rights, indigenous peoples’ rights, self-esteem, food sovereignty, citizenship, housing and land rights with a gender perspective.

Ricarda, as the eldest of the young indigenous women in the communities of the Altos Chiapas, had not previously equated human rights with local community participation and freedom of speech. Having internalized norms and values in her culture of fear, she assumed that silence and downcast eyes were a natural part of life for women, unlike the voice and participation of men in her communities.

Ricarda began attending workshops and midway through the process, she experienced her brother’s discontent with her participation. Ricarda defended her decision to participate. She also negotiated with her father and was able to continue attending the workshops.

Ricarda participated with great enthusiasm in each community activity. She led the discussion on food sovereignty, emphasizing the importance of good nutrition for the people, the soil (for compost making), and the vitality of human rights. She also created an email account and practiced translating exercises within the same youth group (from Spanish to Tsotsil Maya). Ricarda, alongside other partners, held an important conversation with a representative from the Ministry of Social Development (SEDESOL) to make their visions known, the first exercise of self-management with governmental agencies.

After attending The Sun of the Butterflies trainings, Ricarda created a new vision for her life: “I, Ricarda will work hard to not fear anything anymore and have strength to go on… I will also take care of my parents and I promise to finish my schooling.”

In Ricarda’s life, especially the last three months, there have been obstacles and fears, but she now knows how to overcome them. Ricarda even had the confidence to serve as the Master of Ceremonies for the closing ceremony of The Sun of the Butterflies project.