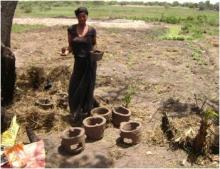 THP animator Argentina Paulo Cossa explains how the Zuza Epicenter in her community of Mozambique showed her how to organize her own income-generating projects:

My name is Argentina Paulo Cossa, I am widow and I am 32 years old. I am the mother of three children and I have collaborated as an animator at Zuza Epicenter since June 2013. I began as a partner of The Hunger Project after participating in an awareness-raising campaign organized by the Microfinance Subcommittee President.

During my participation in epicenter activities, I found that I liked the trainings and the demonstrations of agricultural conservation practices. I learned new ways to produce maize and vegetables that were very different than the ways I used to plant.

Recently, I participated in trainings at the Chokwe Epicenter about production of stoves that use less firewood. As a result of what I learned at this training, I already trained 18 people in my village (Zuza), in partnership with another animator. Together, we produced 13 mobile stoves that are now in the process of drying. I expect to sell the stoves and open a handcraft workshop to produce other pottery products in addition to the stoves.

I am anxiously awaiting the opening of the Rural Bank in my community, as well as the Health Unit of the Epicenter, and the electrification of the village. All of these events will streamline the development of the village.

As an animator, I commit myself to continuing to mobilize the co-residents of the village to join Hunger Project programs and to engage in the sustainable development of the village.