HIV-positive Partner Builds a Home and Provides for Her Family 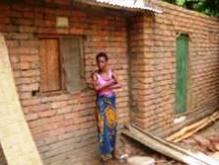 Elizabeth Godia is a 35-year-old widow and one of The Hunger Project’s partners in Malawi who is living with HIV and took part in the Microfinance Program at Nchalo Epicenter. She accessed a first cycle loan of K10,000 (about US$65) which she repaid on time and, in September 2009, accessed a second loan which she repaid ahead of the repayment schedule.

Elizabeth has been involved in several different income-generating activities in her community, one of which is buying and selling tomatoes to Illovo Sugar Company. With proceeds from her sales, she has built a semi-detached house with an iron roof and purchased iron sheets to roof a second house that she intends to rent out for additional profit.

Due to her success in the Microfinance Program, Elizabeth is able to care for her six children (four girls and two boys) independently. She is grateful for the opportunity to improve her living standards through the the program at her local epicenter.

Invest in Elizabeth and thousands of other women leaders like her: Give now!