From Orphan to National Advocate for the Rights of Entrepreneurial Women 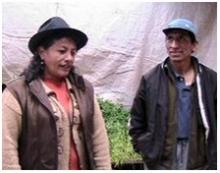 At the age of eleven Juana was orphaned and spent most of her childhood caring for her younger siblings. She worked during the day at a bakery to support her family and spent nights studying to be a medical assistant. Juana’s extended family did not approve of her studies and ambitions and refused to help with even basic housework.

Undeterred, Juana continued her studies and, after she married and had children, opened a small bakery in her home – but she says it was a lonely struggle.

Juana joined Chirapaq in 2008. There, she and other women in her community began a small business, raising and selling guinea pigs. Though it was difficult to gain the support of local government necessary to expand their business to new markets, Juana was eventually elected President of her cooperative and has since spoken at national conferences about her efforts.

Juana has even advocated nationally at the Ministry of Labor to expand the rights and opportunities of women entrepreneurs in her region.

Juana Segura Serrano, founder of the Women Farmers Front of the Anta Province (FEMCA) passed away on March 15, 2014.

Ms. Segura Serrano was a celebrated Quechua leader, and was recognized in 2012 with the Peace Prize from the Ministry of Women and Social Development. In Cusco, Ms. Segura Serrano promoted productive initiatives oriented toward women such as animal husbandry, the cultivation of native plants and bread making. She also advocated for a society free from violence against women through radio programs in which she facilitated discussions and reflection on the impact of the different types of violence against women.

Ms. Segura Serrano raised the voice, dreams and hopes of indigenous women, who like herself, fight to overcome the silence and achieve their dreams. Her untimely death left an important gap within the indigenous movement and we hope that her life serves as an inspiration to the leaders that will assume the helm of the challenges that Ms. Segura Serrano fought to overcome.