From Hiking Through Hills to a Short Walk for Maternal Care 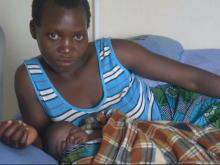 Mpingo Epicenter’s maternity unit was constructed in 2009 through a partnership between the Mpingo Epicenter community and THP-Malawi. However, the facility lacked medical equipment as well as professionally trained staff to oversee deliveries. THP-Malawi had long been working with Mpingo community partners to fill this gap by developing cross-sector partnerships with corporations and government.

Since early 2011, THP-Malawi had been following a lead on a partnership with Telecom Networks Malawi (TNM), one of Malawi’s largest mobile network carriers. The partnership would be significant: THP-Malawi had written a proposal for 3 million kwacha (approx.US$20,000) worth of maternity equipment for Mpingo Epicenter. At the same time, THP staff members were lobbying the Blantyre District Health Office (DHO) to fulfill their mandate of providing the health personnel and medications required to fully operate the facility.

In Quarter 4 2011, all the partners came together to meet their commitments. TNM’s 3 million kwacha donation, the DHO’s provision of staff and materials, THP-Malawi’s logistical coordination and Mpingo Epicenter’s community contributions fused to complete the Mpingo maternity wing and prepare it for its opening on December 16, 2011.

As though she were waiting for the opening of the facility, on December 17, 2011, Mercy Thomas, 25 years old, from Tambala partner village, walked less than a kilometer (0.6 miles) into Mpingo maternity, ready to deliver. Mercy has the distinction of being the first woman to deliver in the facility. She gave birth to a healthy baby boy, Enock.

“This is my third born child – the first two are girls. I used to walk a long distance of about 7 kilometers (4.4 miles) to safely deliver at Mpemba health center. The area is hilly and mountainous, making it really difficult for pregnant women to walk on foot, and as such many of my colleagues used to deliver at home and some of them died, including many newborns. I thank THP-Malawi, Blantyre DHO and TNM for opening this maternity wing. It’s clean and I have been given all the help I needed. Within a kilometer, we now have a decent delivery place,” Mrs. Mercy Thomas stated. Within just two weeks, six babies (one boy and five girls) had already been safely delivered at the facility. On top of that, 88 women received family planning services and 16 children (9 boys, 7 girls) received ‘children under five’ clinic services.