Every Woman Must be Mentally and Financially Self-reliant 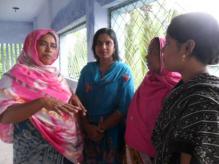 Anjuman’s childhood was spent in a spacious environment in a rural village. She was more restless than other girls: she played a village game called marble, she went fishing, and collected mangoes.

Anjuman’s energy was redirected toward school, but when she finished primary school, she was unable to continue her education. She got married to Mr. Abul Hossain of Tilna village at the age of 12.

Anjuman received positive support from her new husband, but after two years she could no longer suffer the physical torture from her in-laws, forcing her to pay a dowry. She and Abul were able to escape, with only 250 Taka (US$3) to their names. Through their entrepreneurial spirits, they made ends meet by growing vegetables and other means. Eventually relieved from the early financial burdens of their marriage, Anjuman started supporting the personal development of other village women. She arranged food for hungry families and support for the sick.

As a result, she became well known within the village, and in 2003, she was elected as a representative of her Union Parishad. Anjuman was then selected for THP-Bangladesh Animators Training. Over the five days of training, she learned how to empower women as key change agents and how to explore the opportunities that came with being an elected representative.

Anjuman returned to her area after the Animators Training “on fire” and led an effort that established 100% sanitation services within four months and created 12 active Community Development Forums (CDF). After Anjuman participated in THP’s Women Leadership Training, she realized it is not fate that caused the difficulties in her life, but rather the patriarchal society in which she lived.

After this training, Anjuman started an initiative based on her belief that women should be organized and self-reliant. She began protesting illegal activities and took initiative to inform women about their rights. To encourage self-reliance, she created an organization named “Shawnirvor Gram Unnaon Somity” (Self-reliant Village Development Organization). At present, they have saved 110,000 Taka (US$1400). They campaign to stop early marriage, end dowry and end domestic violence. She is also the general secretary of the Bikoshito Nari Network (Women Network) in Patnitola Upazila.

Twenty-eight women who have participated in Anjuman’s sewing trainings for underprivileged women are now earning their own livings. In addition, Anjuman directs an adult education center from which 40 illiterate women have graduated, fully literate and capable of managing their own accounts.

Anjuman is leading the development of the Akborpur Union. She believes that if women get the opportunity to unleash their creativity, they will conquer the darkness of their life and contribute to the family, society and country.