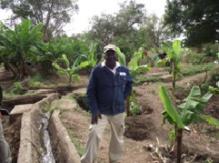 Silva Joaquin Ngovene is 67 years old and living in Chokwe-Macarretane village. He is married, the father of four children and serves as the chair of the farmers’ association in his village. Silva joined THP-Mozambique in 2006, at Chokwe Epicenter. In 2007 he was elected the chair of the Epicenter Committee, but could not accept the appointment at the time due to his responsibilities as a local leader working in the agricultural cooperative.

According to Silva, THP has played an important role in his life particularly with epicenter trainings and workshops that have benefited him as a farmer who produces for the market. Community partnerships with THP-Mozambique have made a tremendous impact on larger agricultural operations in the region by committing resources to local farmers’ associations, providing technical support, distributing improved seed, and monitoring the farmers’ work in the field. There is no price for technical assistance they receive as farmers, said Silva.

With the assistance and agricultural inputs–fertilizer, seeds, equipment–he received from THP-Mozambique, Silva is currently producing beans on an area of about one hectare (approx. 2 acres), and expects his efforts to yield more than two tons of beans. The harvest represents a considerable increase in yields from the time before he received THP training on how to maximize the use of his land holdings for food production.

Silva thanks THP and its investors and asks that we continue activities and collaboration with farmers’ associations to help farmers produce not only food for their families but also food for other Mozambicans both within Chokwe and beyond Chokwe/Gaza Province.

Invest in smallholder farmers like Silva and his community members.