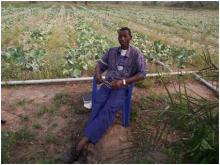 Vicente Paulo Cossa is 53 years old, living in Zuza village in Mozambique. He is married and the father of five children, three boys and two girls. Mr. Cossa joined The Hunger Project (THP)-Mozambique in 2009 when THP initiated its activities in Zuza. He is a member of the epicenter committee in charge of food security.

When he was elected by the community to be in charge of food security, he felt very happy and proud because agriculture is his passion. Mr. Cossa underlines that although he was extremely interested in and motivated to learn about agricultural practices, he did not know the subject before joining THP. Thanks to the trainings held by THP, Mr. Cossa has learned a great deal about farming and has used this knowledge in his own garden. The results, he reports, are fantastic, compared with the results he had before the trainings. The food production in his garden has increased to the point where he has enough to both feed his family and to sell in the village.

Mr. Cossa would like to continue to increase the size of his garden and improve food production and productivity in coming years. In this way he can help more people by providing food and jobs while he increases his revenue. “I have been learning a lot from the THP especially in food production and food processing. With my food processing knowledge, I have trained some relatives and also I have improved my family’s nutrition,” he says. Mr. Cossa personally thanks THP for its work and would like to see other villagers joining THP and to improve their lives.