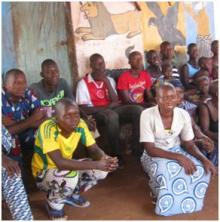 Noélie Dossou from the Kissamey Epicenter is 18 years old. A student in grade six at the secondary school (two years before university), she is one of the youth leaders of the epicenter. Coming from a poor family, Noélie is the second of seven children. Her father, a farmer, acts as a voodoo dignitary in the village of Houngbamè.

Noélie’s fate, like that of all her siblings, seemed sealed: she would never have access to school, not to mention secondary school. In fact, no child in Noélie’s family has ever continued schooling beyond the basic level. Yet, Noélie continues to fight against the odds to carry on her studies with the purpose of achieving her dream of becoming a renowned mathematics teacher. What allows her to continue pushing ahead and to be able to appear among leaders of the Kissamey Epicenter today? She tells her story in her own words:

“Very early on, I realized that it wouldn’t be easy for me to achieve my dream of going far with my studies and becoming a mathematics teacher. My family is poor and has few resources to provide for my siblings and myself. I opted to start a small business of buying and selling vegetables (tomatoes, okra, peppers and others) and foodstuffs (cassava flour and maize) rather than go to school. I was obliged to do this when I was 15 years old, when resources became very scarce and the situation was pushing me to drop out of school.

I had succeeded in getting CFAF 6,000 (US $12) from my mother to start my business On Wednesday afternoons, when I did not have class, and on weekends, I would seize the opportunity to give time to my little trade. The benefits of that enterprise allowed me to stay in school from form 3 to form 4. I had to return the CFAF 6,000 to my mother; I was obliged to do so and that seriously limited my capacities to continue my activities. I then had to borrow CFAF 5,000 (US $10) from my mother again and kept fighting on until I met The Hunger Project (THP) team at Kissamey last summer during a VCA session that they were holding with the youth.

I discovered some new energy, especially when the team talked about income-generating activities that young people can carry out. Young people from the village, including myself, received CFAF 10,000 (US $20) as pedagogical support funds for the promotion of youth entrepreneurship. Given my previous experiences in small trading, I succeeded in getting my village’s youth to let me be the first one to use the funds and I yielded much profit: CFAF 20,000 (US $40) in just two months. I was therefore able to get financially ready for entering form 6, and I was also able to raise a small capital of CFAF 8,000 (US $16) to continue my trading activities.

I am convinced that with the training that THP-Benin is giving the youth, many young people like me will be able to avoid dropping out of school because of the lack of financial resources that hits our parents. Also, those who were obliged to drop out are already discovering fresh hope with The Hunger Project through the youth mobilization initiative for the achievement of the MDGs in the epicenters.”