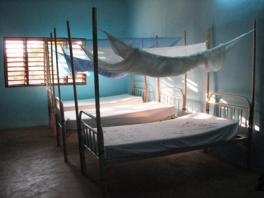 Today is World Malaria Day! Instituted in 2007 by the World Health Assembly to recognize the global effort to provide effective control of malaria, World Malaria Day is an opportunity for international actors and countries to expand the conversation on fighting the disease and for new donors to join the global partnership.

Combating malaria, an infectious disease born from Anopheles mosquitoes, is a high priority on the United Nation’s international agenda. Included as Millennium Development Goal #6, the United Nations aims to halt and reverse the incidence of malaria by 2015. In 2010, 3.3 billion people – half of the world’s population – lived at risk of malaria infection. The World Health Organization reports that 216 million people worldwide currently live with malaria, contributing to an estimated 655,000 deaths. People living in low-income countries are among the most vulnerable to infection. The World Health Organization urges three main strategies for malaria control: prevention with insecticide treated mosquito nets (ITNs), prevention with indoor residual spraying, and rapid treatment with artemisinin-based combination therapy antimalarial medications.

Since 2004, global production of ITNs has increased five-fold, from 30 million to 150 million in 2009. In Africa, 200 million ITNs have been delivered and are ready for use; however, another 350 million are necessary to achieve universal coverage. The recent ITN production scale-up has been especially important for African children, the most vulnerable to malaria infection, who have experienced a significant increase in their use of ITNs – rising from 2 percent in 2000 up to 22 percent in 2008. Indoor residual spraying (IRS) is a proven and effective technique whereby houses are sprayed with insecticide that kills mosquitoes. A larger logistical challenge, IRS requires spray operators, supervisors, educators, clinicians, community mobilizers, and environmental and wash facilities in order to meet environmental regulations. Unfortunately, the recent emergence of insecticide resistance is threatening the success of IRS and ITNs in the fight to control malaria in Africa.

The Hunger Project continuously works to prevent and treat malaria around the world. In 2011, The Hunger Project distributed more the 43,000 ITNs to our partners, either by selling them at a low cost or via partnerships with like-minded organizations like UNICEF. In addition, more than 180,000 village partners accessed health services at our epicenter clinics during 2011, where malaria infections are regularly treated.

Content submitted by THP Research and Advocacy Intern Elisabeth Epstein. Elisabeth joined THP in Fall 2011 and holds a double B.A. in International Affairs and Psychology from Indiana University. She will be graduating with a Masters in International Development from The New School in May 2012. Before starting at THP, Elisabeth worked as the Safe Water and Health Intern for the Academic Model Providing Access to Healthcare (AMPATH), researching, collecting, and analyzing fieldwork data alongside her Kenyan colleagues. Elisabeth has a combination of intern, work, and/or educational experience spanning 9 countries and 4 continents, including China, Thailand, France, the Czech Republic, Belgium, Germany, Mexico, The United States and Kenya.