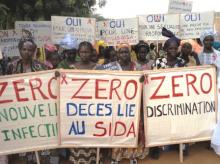 As we celebrate World AIDS Day December 1, we are happy to report some good news: the rate of HIV infection is declining! Worldwide, 2.3 million people became newly infected with HIV in 2012, down from 3.4 million in 2001. However, there is still an alarming number of people, 35.3 million, living with HIV.

Developing regions account for the highest rates of infection, with sub-Saharan Africa alone accounting for over 70 percent of new infections and nearly 25 million of the total number of people living with the virus worldwide. In Uganda, for example, the prevalence of HIV has increased, and it remains a major cause of morbidity and mortality in the country. Forty-five percent of the two million orphans are HIV/AIDS related. HIV/AIDS is killing farmers, teachers and health workers, and negatively affecting food production, life expectancies and infant mortality rates.

With educational sessions in rural communities throughout Africa, South Asia and Latin America, The Hunger Project raises awareness about HIV/AIDS and empowers people to overcome the unwarranted stigma around it. As a result, people from rural communities are more confident to undergo voluntary counseling and testing (VCT).

Our partner countries across Africa have made a firm commitment to prevent and put an end to the spread of HIV/AIDS.

In response to the HIV/AIDS pandemic in Africa, in 2003 The Hunger Project launched HIV/AIDS and Gender Inequality Workshops to empower grassroots people to transform the conditions that have perpetuated HIV/AIDS. To date, more than 1.1 million people have attended these workshops.

Women in Malawi are empowered to take control of their sexual and reproductive health with the distribution of female condoms at epicenter health centers.

In the Southern region of Ethiopia, around Enemore, Mekan and Wurib Epicenters, the decision of the communities to do pre-marriage HIV/AIDS tests by prospective spouses has reportedly made a significant contribution in controlling the spread of the virus. THP-Ethiopia also assists the health center within the epicenters to conduct VCTs and other HIV/AIDS activities.

In Uganda, The Hunger Project trains specialized volunteer “HIV Animators” in each epicenter who conduct workshops that engage both women and men in learning about facts of HIV/AIDS and the role of gender inequality in fueling the pandemic.

THP-Ghana has been implementing a Gender Inequality and HIV/AIDS project. The major focus has been on awareness creation to change socio-cultural practices and the negative perceptions that promote the spread of the disease. The project includes three major thematic areas: prevention and behavior Change, abstinence and protection (condom use). A series of HIV Testing and Counseling (HTC) exercises have also been organized under the “Know Your Status” campaign.

In Malawi, a special Microfinance Program aims specifically at empowering often ostracized HIV-positive partners. While many NGOs do not provide loans to HIV-positive people out of fear that they will die before loans are repaid, THP acts differently. THP believes that all people have the right to access resources that can help them live better and more independent lives. With access to loans, people living with HIV/AIDS can, and do, improve their lives.